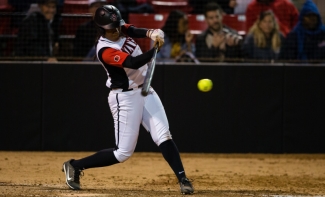 Photo:  Taylor Adams drove in the first run of the game for SDSU in a 3-1 win over UCF.  Courtesy goaztecs.com

March 1, 2018 (San Diego) - San Diego State picked up a 3-1 win over UCF in the first game of the San Diego Classic I Thursday night at SDSU Softball Stadium. The Aztecs (7-10) have now won six of their last eight games.

Down, 1-0, SDSU rallied in the bottom of the fourth, recording three of its four hits in the game. Molly Sturdivant led off with a single and was replaced by Kiera Wright. Wright moved to second on a Taylor Stewart groundout and to third on a Shelby Thompson lineout. Taylor Adams, a freshman, then took a 1-0 pitch to left-center field for the first RBI of her career. Iesha Hill followed with a single down the right field line, which moved Adams to third and then thome after the Knight (9-7) right fielder Denali Schappacher’s throw sailed past the cutoff and toward the San Diego State bench.

After stranding a pair of runners with one out in the fifth, the Aztecs added an insurance run in the sixth. Hill drew a two-out walk and was replaced by Aris Metcalfe, who stole second and scored on a Megan Smith single to center field.

Hill reached on all three plate appearances for the Aztecs, while Smith singled, walked and had a RBI.

Alex Formby, who on Tuesday was named the Mountain West Pitcher of the Week, earned the win for SDSU after tossing four scoreless innings of relief, striking out six with just two hits allowed.

Formby (4-5) entered the game in the fourth after starter Marissa Moreno allowed a leadoff walk to Cassady Brewer and a single to Courtney Rotton. After giving up a single to Hayley Bejarano to load the bases, Formby got Tamesha Glover to ground into a fielder’s choice to Hill at third base, who threw it home for the forceout. Jazmine Esparza, however, followed with a single to plate Rotton with the first run of the game. Formby settled down to get pinch-hitter Damara Begin to strike out swinging and Megan Greenwell to ground to her in the circle, where she was able to throw it home for the forceout to get San Diego State out of the inning. Formby finished the game retiring the final 11 batters she faced.

Moreno pitched the first three innings and yielded one run on four hits and a walk, striking out three walks.

San Diego State snapped an 11-game losing streak when (0-8 this year) when being outhit by its opponents.

The Aztecs play two games on Friday, first against No. 21/20 Minnesota at 4:30 p.m. and then against CSUN at 7 p.m.  Both games will be broadcast on the Mountain West Network.