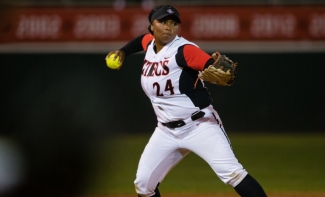 February 16, 2018 (San Diego) - North Dakota State tied the game with a run in the top of the sixth inning and scored an unearned run in the seventh to rally past the San Diego State softball team 2-1 Friday night at SDSU Softball Stadium. The Bison improved to 4-3 with its second win of the day at the 28th annual Campbell/Cartier Classic, while the Aztecs dropped to 1-8 with their sixth straight loss.

SDSU scored its run in the bottom of the second when Iesha Hill singled home Shelby Thompson.

NDSU tied it in the sixth when Katie Shoultz walked and scored on a double by Bre Beatty, just beating the throw home. North Dakota State clinched the win in the seventh when Shoultz’ popout to shallow right-center field scored Montana DeCamp from third.