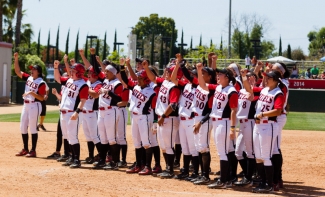 Aztecs await a possible at-large bid to the NCAA tournament

May 13, 2017 (Reno) - The San Diego State softball team broke a 6-6 tie with two runs in the top of the sixth inning and five more in the seventh en route to a 13-6 victory over Nevada Saturday afternoon in Reno. The win gave the Aztecs (31-18, 15-9 MW) the series and a second-place finish in the final Mountain West standings.

Nevada got on the scoreboard first when Mele Tausinga led off the bottom of the second with a home run over the left-center field wall.

After leaving two runners on base in each of the first three innings, San Diego State went to work in the top of the fourth as Jaylene Ignacio (Oceanside, Calif.) and Zaria Meshack (Vallejo, Calif.) each singled with one out. Jenavee Peres (Garden Grove, Calif.) then doubled to right-center field to score both runners and give the Aztecs a 2-1 lead. Sydnee Cable (Huntington Beach, Calif.) reached on a two-base error, before Molly Sturdivant (Santa Ana, Calif.) ripped a double off the left-center field fence to score Peres and Cable. Sturdivant moved to third on a wild pitch and Katie Byrd (Santee, Calif./West Hills HS) was walked on four pitches. Shelby Thompson (Benicia, Calif.) followed with a single through the right side, which easily scored Sturdivant. Byrd, meanwhile, raced to third on the play and then scored when Wolf Pack right fielder Erika Hansen’s errant throw missed third baseman Alyssa Mendez, making it 6-1 SDSU.

Nevada, however, responded in the fifth with a five-run inning, highlighted by a three-run homer by Hansen and another solo homer by Tausinga.

San Diego State answered in the sixth as Peres drew a five-pitch walk, Cable followed with an infield single before being replaced by Kristen Parker (Mira Mesa, Calif./Mira Mesa HS) and Sturdivant walked to load the bases. Byrd then laced a single to left-center field to score Peres and Parker. On the play, Sturdivant and Byrd each got into scoring position on an error by the Wolf Pack center fielder Aaliyah Gibson. Nevada reliever Rachel Rodriguez, however, got Thompson and Taylor Stewart (Bellflower, Calif.) to pop out to second base, and Megan Smith (Valencia, Calif.) to line out to third base to leave the runners stranded.

After Aztec reliever Marissa Moreno (Torrance, Calif.) tossed a scoreless bottom of the sixth, SDSU tacked on five more runs in the seventh, thanks to a three-run homer by Peres and a two-run home run by Thompson.

Moreno then retired Nevada in order in the seventh to secure the win.

San Diego State, which came into the weekend leading the country in batting average, banged out 15 hits in the win today.

Thompson had three hits, including the two-run homer and a double, to go along with three RBIs and a run, while Meshack added three hits and two runs.

Peres, meanwhile, had two hits, including the three-run home run and a double, with five RBIs, three runs and a walk. The junior catcher finished the regular season with a .454 average, 16 homers, 60 RBIs and 56 runs scored, not to mention an 18-game hitting streak.

Byrd (2 RBI, R, BB) and Ignacio (2 R) added two hits apiece, while Sturdivant had a hit, two RBIs, two walks and a run, and Cable a hit, walk and two runs. Stewart also reached twice with a single and a walk.

Moreno (12-6) picked up the win after tossing 2 1/3 scoreless innings of relief, allowing just a single walk, while striking out one. Erica Romero (Corona, Calif.) started the game and gave up one run on five hits and a walk over 2 1/3 innings. Alex Formby (Orange, Calif.) pitched the middle 2 1/3 innings and yielded five runs on six hits and a walk, striking out two.