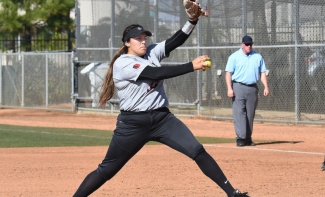 Formby ties school record with 12th save of her career

Photo:  Marissa Moreno picked up the win in the circle for the Aztecs.  Courtesy goaztecs.com

After Nevada failed to score in the top of the first inning despite getting its first two runners on base, SDSU went to work in the bottom of the first. Taylor Adams first singled in Kiera Wright and then scored on a two-run ground-rule double by Taylor Stewart (Shelby Thompson also scored on the play).

In the fourth, San Diego State’s Alizae Umi reached on a leadoff infield single and was replaced by Aris Metcalfe. Metcalfe stole second base and scored on a Wright single.

The Wolf Pack threatened in the fifth when Kwynn Warner (walk) and Haley Burda (single) each got into scoring position on a sacrifice bunt by Lauren Gutierrez. Sadaria McAlister was able to score Warner with a groundout to second and Aaliyah Gibson followed with a four-pitch walk. Facing Nevada’s best hitter - Erika Hansen - Aztec starting pitcher Marissa Moreno was able to get out of the jam by getting Hansen to fly out to Wright in center field.

The Wolf Pack challenged again in the sixth when Kenzi Goins and Alyssa Mendez each singled. With one out, Alex Formby replaced Moreno (3-13) in the circle and, after a four-pitch walk to Warner to load the bases, struck out pinch hitters Jennifer Purcell (looking) and Jyllian Ahart (swinging) to keep the score at 4-1.

Nevada made one more last ditch effort to force extra innings in the seventh as Hansen and Goins each had back-to-back two-out singles. Formby, however, got pinch hitter Mele Tausinga to ground into a fielder’s choice to second baseman and West Hills alum Katie Byrd, who flipped it two Thompson at shortstop to clinch the win for SDSU.

Moreno picked up her first win since Feb. 22 by allowing one run on five hits and three hits over 5 1/3 innings, striking out three. Formby earned the save after yielding two hits and a walk over 1 2/3 scoreless innings of relief, striking out two. The save was Formby’s second of the year and 12th of her career, which ties Celena Velasquez (2003-06) for the most in program history. Formby has accomplished the feat in just three seasons at San Diego State (2016-18) (Formby played at Virginia in 2015).

Byrd singled and walked to pace the Aztec offense.

RHP Alex Formby has pitched in relief in 28 of her 32 appearances this year. She has inherited 28 runners in relief and has only allowed six to score (21.4 pct.).

There has been a save in each of the last four games SDSU has played (two for RHP Alex Formby, one for UNLV and one for Nevada). In San Diego State’s first 34 games of the season there were only a combined three saves (all by SDSU’s opponents).

The Aztecs and the Wolf Pack play the rubber game of the series at noon Sunday.