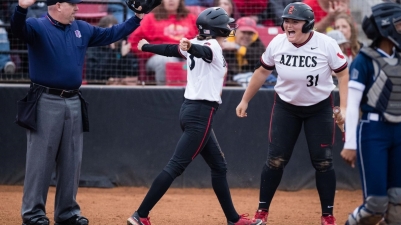 After spotting a run to the Wolf Pack (9-25, 1-7 MW) in the top of the first inning on a triple by Aaliyah Jenkins that scored Jessica Sellers and failing to score in the bottom of the first while loading the bases with no outs, SDSU scored three times in the second, all with two outs. Danielle Romanello singled and Nicole Siess walked on five pitches. After Audrey Kull replaced Romanello at second base, both runners moved up a base on a passed ball by Nevada’s Jenkins with Bella Espinoza at the plate. Jenkins dropped another pitch and Kull started to run home. Jenkins recovered, however, and tried to get Kull at third, but Kull raced home and beat the tag to tie the game at 1-1. On the very next pitch where Espinoza drew a five-pitch walk, Siess scored on a wild pitch. Mac Barbara then ripped a double to center field to knock in Espinoza and give San Diego State a 3-1 advantage.

The Wolf Pack got one back in the third as Tatum Maytorena reached on an infield single, stole second and scored on a double by Jenkins.

The Aztecs answered in the fourth when Romanello led off with a double and advanced to third on a wild pitch. Siess blooped a single to right-center field to make it a 4-2 SDSU lead.

Nevada managed only one runner - a one-out single by Jenkins in the sixth - the rest of the game against San Diego State relief pitchers Dee Dee Hernandez and Maggie Balint. Jenkins got to third in the inning after a stolen base and passed ball, but Hernandez (6-3) struck out Paris Schwalbe swinging for the Wolf Pack’s final threat.

Siess (2-for-2, RBI) and Espinoza (2-for-3) each had two hits, a run and a walk for SDSU, which outhit Nevada, 8-5. Romanello added two hits and scored a run, while Barbara was 1-for-2 with an RBI double and two walks (one intentional).

Prior to the game, over 30 former San Diego State softball players were honored with their families. Kathy Van Wyk, the all-time winningest coach in program history, then threw out the ceremonial first pitch.

The Aztecs are 8-0 in Mountain West play for the first time since starting 13-0 in 2006. The 8-0 start is SDSU’s third-best start in league history.

This is San Diego State’s eighth winning streak of at least 10 games in program history. The 10-game winning streak is the Aztecs’ longest since winning a school-record 13 straight games from March 12-April 6, 2013. That stretch was one of four times SDSU has won 13 consecutive games.

San Diego State looks for its third straight series sweep when it hosts Nevada at noon on Sunday.