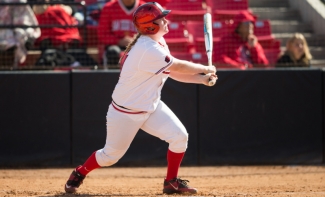 February 17, 2018 (San Diego) - Molly Sturdivant capped a four-run third inning with a three-run homer to lift the San Diego State softball team to a 4-1 victory over North Dakota State at the 28th annual Campbell/Cartier Classic Saturday afternoon at SDSU Softball Stadium. The win snapped a six-game losing streak for the Aztecs (2-8), who avenged a 2-1 loss on Friday to the same Bison (4-4) team.

SDSU, which had only three hits in the entire game on Friday with NDSU, had four hits in the bottom of the third inning today. Shelby Thompson led off with a single up the middle, advanced to second on a wild pitch and moved to third on a groundout by Aris Metcalfe. Megan Smith followed with a single to center field to put San Diego State up, 1-0. Later in the inning with Taylor Adams on base as well after a single, Sturdivant drilled the first pitch she saw over the right-center field wall to make it 4-0 Aztecs. It was her third home run of the season.

North Dakota State got its lone run in the top of the seventh when Montana DeCamp scored on a passed ball.

SDSU outhit the Bison 8-6 in the game as Thompson and West Hills High alum Katie Byrd had two hits apiece. San Diego State, which struck out 14 times last night in the loss with NDSU, only struck out once in the game today.

The offense was plenty for San Diego State pitcher Marissa Moreno, who allowed just one unearned run on six hits and two walks over 6 1/3 innings, while striking out one. The right-hander won her first game of the year and is now 1-2.

Moreno got out of jams early, thanks in part to the Aztec defense. With one out and the bases loaded in the first inning, Moreno got Maddie Hansen to ground into a double play as SDSU third baseman Iesha Hill was able to touch third to force out Bre Beatty and toss to Adams at first base to end the inning.

With one out and two on in the second, Moreno got Kalyssa Koehn to line out to Smith in right field. Smith then fired it to Adams at first to double up Madyson Camacho and once again end the threat.

Alex Formby relieved Moreno in the seventh and retired the two batters she faced.

RHP Marissa Moreno tossed 6 1/3 scoreless innings today and now has gone 19 1/3 innings without giving up an earned run. Over that time, she has lowered her ERA from 16.81 to 5.06.

3B Molly Sturdivant recorded the 17th home run of her career, tying Megan McDonald (2005-08) and Erryn Gutjahr (1996-99) for the seventh most in school history.

The Aztecs wrap up their play in the 28th annual Campbell/Cartier Classic at 11:30 a.m. Sunday against Cal State Fullerton.