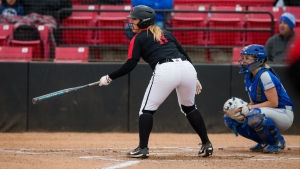 Aztecs fall to 6-4 on the season

February 21, 2019 (Fullerton) - San Diego State was unable to get its offense going in a 5-1 loss at Cal State Fullerton Wednesday in Fullerton, Calif. The Aztecs fell to 6-4 on the season.

SDSU managed only two hits in the game - both by Katie Byrd - off Titan (8-3) pitchers Janelle Rodriguez and Sophie Frost. San Diego State’s other baserunners in the game were Megan Smith (two walks), Kiera Wright (one walk) and Molly Sturdivant (hit by pitch).

The Aztecs got on the scoreboard in the top of the first inning when Wright led off with a walk, stole second base, moved to third on a Kelsey Munoz flyout and scored on a sacrifice fly by Shelby Thompson.

CSF tied it up in the bottom of the second when it loaded the bases with two outs. Following a 40-minute rain delay, Alexa Neil’s infield single scored Jayda Su’e to tie the game at 1-1. SDSU pitcher MJ James got out of the jam by getting Cal State Fullerton’s best hitter Ari Williams to ground out weakly to first base.

After each team stranded runners in the following innings, the Titans put the game away with four runs in the fourth, thanks to four hits, a walk, a hit batter and a wild pitch.

James (2-1) took her first loss of the season, allowing all five runs on seven hits, three walks and three hit batters in sloppy conditions. She struck out one. Marissa Moreno pitched the final two scoreless innings, striking out three with two hits allowed.

There was a 40-minute rain delay in the bottom of the second inning.

The Aztecs had their nine-game winning streak snapped when leading at any point in the game.