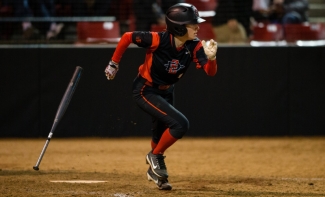 March 11, 2018 (Fullerton) - The San Diego State softball team lost a 4-3 extra-inning game at Cal State Fullerton on the final day of the Louisville Slugger Invitational Sunday in Fullerton, Calif. It was the seventh straight loss for the Aztecs (8-17).

Tied at 3-3 after seven innings, SDSU failed to score in the top of the eighth with the international tiebreaker in effect. The Titans (11-10) then loaded the bases before a fielder’s choice grounder by Bryanna Ybarra scored Sammie Vandiver.

CSF tied it in its bottom half as Zoe Richard’s single scored Deshea Hill.

The Aztecs responded in the second when Katie Byrd stroked a two-run double to center field, scoring Zaria Meshack and Smith.

Cal State Fullerton got one back in the third on a RBI double by Richard to score Kelsie Whitmore and tied it in the fifth when Richard’s sacrifice fly scored Vandiver.

SDSU was outhit 10-6 in the game, but had two hits apiece from Smith and Shelby Thompson. Smith also doubled, scored twice and had a walk for San Diego State.

SDSU fell to 3-6 in one-run games this season, 1-4 in extra innings and 1-4 in games decided by the international tiebreaker.

The Aztecs play a midweek Wednesday game against Fairfield on the campus of University of San Diego. First pitch is set for 4:30 p.m.