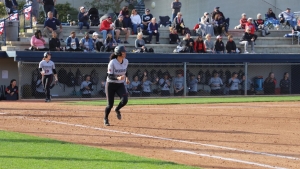 February 26, 2019 (Los Angeles) - The San Diego State softball team was unable to come up with the timely hit in a 2-1 loss Tuesday afternoon at Loyola Marymount in Los Angeles.

After SDSU stranded Kiera Wright at third after a leadoff single in the top of the first inning, LMU went on top in the bottom half of the inning on a two-run home run by Molly Grumbo. It proved to be Loyola Marymount’s only runs of the game.

San Diego State didn’t threaten again until the fifth when Maddi Ayers reached on a one-out single and was replaced by Megan Smith. Smith moved to second on a sacrifice bunt by Aris Metcalfe and then stole third. Loyola Marymount pitcher Hannah Bandimere, however, struck out Taylor Adams swinging to keep the Aztecs off the scoreboard.

After a perfect inning of relief by SDSU’s Marissa Moreno, Wright reached on a throwing error by Lion third baseman Riley Ehlen in the sixth and moved to second on the dead ball. Linnay Wilson replaced Bandimere in the circle and stuck out West Hills alum Katie Byrd swinging, her first strikeout of the season in the team’s 15th game. Kelsey Munoz followed with a single to centerfielder Hailey Jackson, whose throw home was wide and allowed Wright to trot home with San Diego State’s lone run of the game. Kayla Sok pinch ran for Munoz, but was left on second after Wilson struck out Shelby Thompson looking and Kylie Fraser popped out to second base.

Molly Sturdivant gave the Aztecs some hope in the seventh when she led off with a single and was replaced by Janina Jusay. SDSU was unable to move Jusay into scoring position, however, and ended with consecutive strikeouts and a popout.

Five different San Diego State players had a hit, while Thompson reached on a walk.

Alicia Garcia took the loss for the Aztecs after allowing two runs on four hits over four innings, striking out two. Garcia is now 1-3 on the season.

Katie Byrd’s first strikeout of the season came on her 38th at-bat and 47th plate appearance.

San Diego State co-hosts the San Diego Classic this weekend. The Aztecs are slated to meet Brigham Young at 5 p.m. Thursday, UIC at 7 p.m. Friday, Weber State at 7 p.m. Saturday and UC Davis at 2 p.m. Sunday.  Follow @ECMagSports on Twitter to see which games we'll have coverage of.