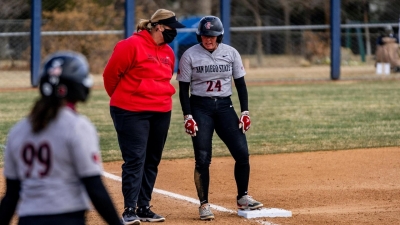 March 21, 2021 (Reno) - San Diego State scored four runs in the top of the sixth inning and loaded the bases in the seventh but was unable to come through in a 9-8 loss to Nevada in the series finale Sunday afternoon at Christina M. Hixson Softball Park.

After reliever Maggie Balint retired Nevada in order in the bottom of the sixth, SDSU quickly got into scoring position when Makena Brocki singled, Nicole Siess followed with a four-pitch walk and Thies moved each runner on a sacrifice bunt. Adams lined out to first baseman Sam Oliver for the second out and Shelby Thompson walked to load the bases. Wolf Pack pitcher, Kendall Fritz, however, got Danielle Romanello to fly out to center field on the ninth pitch of a 3-2 count to end the game and give Nevada the series.

San Diego State took an early lead in the second when Siess hit a three-run home run over the left field wall. It was the first homer of her career.

The Wolf Pack responded with a run in the bottom of the second as Sandaria McAlister drew a bases loaded walk. Aztec starting pitcher Marissa Moreno got out of the jam when she got Lauren Gutierrez to ground into a fielder’s choice double play.

Nevada then added six runs in the third on six hits, including a back-to-back three-run home run by Sierra Mello and a solo one by Oliver. Gutierrez later had a two-run double for the final runs of the inning.

The Wolf Pack scored on a wild pitch in the fourth before the two teams exchanged runs in the fifth. Thompson (home) and Sara Lillie (second) perfected a double steal for SDSU and Gutierrez scored Chelie Senini on a groundout for Nevada.

San Diego State, however, couldn’t get the tying run across the plate after the big four-run sixth inning.

SDSU committed multiple errors (2) in a game for just the third time this season.

San Diego State allowed four unearned runs, its most in a game this season (previous high was two).

The Aztecs had 12 hits, their second most in a game this year. SDSU has at least 10 hits in three of its last four games.

San Diego State plays host to UNLV next weekend at SDSU Softball Stadium, including a doubleheader on Saturday (2 and 4:30 p.m.) and a single game on Sunday (noon).