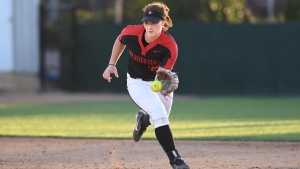 The 17 innings easily surpassed the Aztecs’ (15-19, 3-6 MW) previous record of 14, which happened on three occasions (last vs. New Mexico on May 9, 2003). It was also one inning longer than a pair of Division I games this season (Austin Peay vs. McNeese on Feb. 23 and Jacksonville vs. Holy Cross on March 6).

The two teams combined for 136 total plate appearances, 122 at-bats, 27 runners left on base, 26 hits, 10 walks and four double plays. Additionally, 32 players appeared in the game (16 from each team).

The Rebels (25-7, 6-2 MW) got on the scoreboard in the top of the second inning when a single by Myranda Bueno plated Mia Trejo. With a pair of runners on base and one out, SDSU starting pitcher MJ James got out of the jam by getting Lauryn Barker to line into a double play.

San Diego State tied it in the bottom of the second as Shelby Thompson led off with a single and later scored on a double by Kelsey Munoz.

UNLV took its lead back on a pinch-hit home run by Statia Cermak in the fifth.

After the Aztecs left a pair of runners on base in the bottom of the fifth, the Rebels tried to add to their lead in the sixth. With two outs, Kiley Harrison and Samantha Diaz reached on consecutive singles. Bueno followed with a single, but Harrison was thrown out at home by left fielder Kristen Parker.

SDSU threatened in the sixth as West Hills alum Katie Byrd (walk) and Thompson (single) each got into scoring position with one out. UNLV starter Jenny Bressler, however, struck out Molly Sturdivant swinging and got Munoz to ground out back to her in the circle to maintain its 2-1 lead.

The Rebels added to their lead in the seventh with a pinch-hit home run by Denise Armendariz.

Down, but not out, San Diego State got things going in the bottom of the seventh as Alicia Garcia singled and was replaced by Megan Smith. Kylie Fraser followed with a pinch-hit double to put a pair of runners in scoring position with no outs. One batter later, Kiera Wright blooped a single to center field to score both Smith and Aris Metcalfe, who re-entered the game in Fraser’s spot, tying the game at 3-3.  The Aztecs, however, were unable to get the winning run across the plate as Breana Burke came in for Bressler and, after a walk to Byrd, got Taylor Adams to pop out to shortstop and Thompson to ground into a fielder’s choice.

UNLV looked to take the lead in the eighth after a pair of one-out singles, but reliever Marissa Moreno got Diaz to fly out to right field and Bueno to pop up to third base to end the inning.

The Rebels had the next scoring opportunity in the 10th as Lauren Tycksen led off with a single and moved to second base on a passed ball. Following an intentional walk to Trejo, Moreno struck out Harrison swinging and got Diaz to foul out to right field.

In the 11th, Sturdivant led off with a walk and was replaced by Janina Jusay. Jusay moved to second on a sacrifice bunt by Munoz, but Burke got Garcia to fly out to right field and Metcalfe to strike out looking.

The Aztecs threatened again in the 12thwith Parker and Wright starting with back-to-back singles, and moving up a base on a sacrifice bunt by Byrd. Adams, however, flew out to center field and Thompson grounded out to third base to move onto the 13th.

In the 13th, Munoz reached on a fielder’s choice after a Sturdivant single, moved to second base on a throwing error and to third on a groundout by Garcia. Metcalfe fouled out to third base, keeping the score at 3-3.

UNLV had the next best chance for either team in the 16th when Paxton Scheurer reached on a two-out fielding error. Reina Bondi followed with a double to right field, but Scheurer was thrown at the plate from Metcalfe in right field via Adams at first base.

SDSU went to work in the bottom of the 16th as Garcia and Maddi Ayers reached on consecutive one-out singles. Parker, however, grounded into a double play to get Burke out of the jam.

The Rebels finally broke the 3-3 tie in the 17th when Tycksen reached on a fielding error, stole second and moved to third on a sacrifice bunt by Justine Federe. After Moreno (7-7) intentionally walked Trejo, CC Caccamise hit it hard to Thompson at shortstop. Thompson made a diving play, tossing it to Byrd at second base for the forceout. Byrd’s throw to first, however, was off the mark, allowing Caccamise to reach base and Tycksen to score the eventual game-winning run.

Adams reached on a two-out error in the bottom of the 17th, but Burke got Thompson to fly out to left-center field to end the marathon game.

Thompson led the San Diego State offense with two hits, a walk and a run scored, while Garcia, Munoz and Wright also added two hits apiece. Byrd walked twice, and Parker and Sturdivant each had a hit and a walk.

Moreno was the tough luck loser after allowing just one unearned run over a career-high 11 innings pitched (all in relief). She struck out six and walked three (two intentional).

The two relievers in the game today allowed just one earned run in 21 2/3 innings. San Diego State’s Marissa Moreno pitched 11 innings with one unearned run given up, while UNLV’s Breana Burke went 10 2/3 innings of scoreless relief.

RHP Marissa Moreno pitched 11 innings, the most by an Aztec pitcher since Christina Ross also pitched 11 at Fresno State on May 17, 2008.

The 17-inning game was SDSU’s longest in program history, longest ever in a game at SDSU Softball Stadium and the longest in the country this season. It was San Diego State’s first extra-inning game of the year.

The Aztecs head to Nevada for a weekend series beginning Friday at 4 p.m.