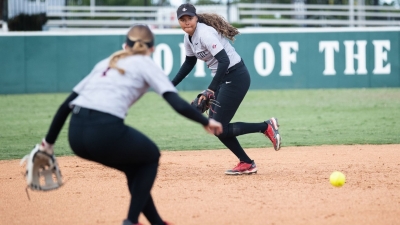 Balint strikes out 12 in three-hit shutout

April 1, 2022 (San Diego) - Elianna Reyes scored on a one-out single by Nicole Siess in bottom of the seventh inning to lift San Diego State to a 1-0 victory over Nevada in the series opener Friday night at SDSU Softball Stadium. It was the ninth consecutive win for the Aztecs (23-10), who are 7-0 in Mountain West play for the first time since 2006.

Maggie Balint struck out 12 in a three-hit shutout for San Diego State, which faced an equally game Black Craft in the circle for the Wolf Pack (9-24, 1-6 MW).

The game-winning single came after Nevada threatened in the top of the seventh. Lauren Gutierrez was hit by a pitch and replaced at first by Abby Larsen. Jessica Sellers advanced Larsen with a sacrifice bunt, but a fielding error by the Aztecs allowed her to reach first base. In an attempt to tag Larsen on the ensuing run down between second and third, an errant SDSU throw sailed into right field and allowed both runners to move into scoring position with no outs. Balint (11-4), however, struck out Aaliyah Jenkins swinging and got Paris Schwalbe to bunt back to her in the circle. Balint caught the ball and quickly threw to shortstop AJ Murphy, who touched third base for the inning-ending double play.

San Diego State responded in the bottom of the seventh when Danielle Romanello tripled off the wall down the left-field line with one out. Reyes replaced Romanello before Siess took an 0-2 pitch up the middle for the walk-off hit.

Balint allowed just three hits and hit a batter in the complete game shutout, her third of the season. The right-hander recorded her eighth double-digit strikeout game of the year.

The Aztecs wasted a chance to score in the first when Bella Espinoza led off with an infield single and moved to third on an error by Wolf Pack third baseman Danielle Lew. Craft (1-11) got Jillian Celis to ground back to her in the circle and struck out Alexa Schultz swinging, before intentionally walking Mac Barbara. Barbara stole second, but Craft struck out Jessica Cordola to keep the game scoreless.

Nevada broke up Balint’s perfect game with a leadoff triple to right-center field in the fourth by Chelie Senini. Senini, however, was thrown out at the plate when Celis fielded Espinoza’s cutoff and threw it to Romanello at the plate for the tag. Tatum Maytorena followed with a triple of her own before Balint struck out Gutierrez and Sellers swinging to end the inning.

SDSU looked to take the lead in the sixth when it loaded the bases with one out on consecutive singles by Celis and Schultz and, after a passed ball allowed each runner to move up a base, another intentional walk to Barbara. Blake, however, struck out Cordola swinging and got Murphy to ground out to first base to keep the game scoreless.

For the game, Blake struck out nine, while allowing one run on six hits and a walk. She held San Diego State to a 2-for-8 outing with runners on base and a 1-for-6 effort with runners in scoring position, stranding six runners.

Balint, meanwhile, didn’t allow a Wolf Pack hit with runners on base (0-for-5) or in scoring position (0-for-5).

The Aztecs’ nine-game winning streak is tied for the eighth-longest streak in program history and longest since winning a school-record 13 straight games from March 12-April 6, 2013. That stretch was one of four times the SDSU has won 13 consecutive games.

The Aztecs are 7-0 in Mountain West play for the first time since starting 13-0 in 2006. The 7-0 start is SDSU’s third-best start in league history.

San Diego State looks to clinch its third consecutive series when its hosts Nevada at 4 p.m. on Saturday.

Craft and Jenkins; Balint and Romanello