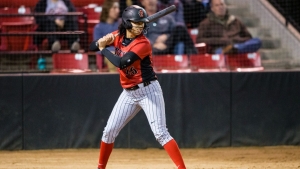 Aztecs drop to 54-6 all time against the Toreros

The winning hit came in the bottom of the 10th on a Lauren Kane two-out single that scored pinch runner Amanda Valle from third base.

Kelsey Munoz led the San Diego State offense with three hits, including a pair of doubles. Kristen Parker was 3-for-4 and scored a run, while Aris Metcalfe singled and walked.

After stranding a pair of USD runners in the first inning, SDSU threatened for the first time in the top of the second on a pair of singles by Molly Sturdivant and Munoz. San Diego pitcher Madison Earnshaw, however, struck out Maddi Ayers swinging and got Metcalfe out when she batted the ball out of the box.

The Toreros quickly took advantage of San Diego State’s early pitching struggles in the second after back-to-back walks with no outs. Aztec reliever Alicia Garcia, who entered after the first walk of the inning, got Kane to fly out to center field, but Rion Simms followed with a double down the left-field line to score Madison Casiano. Halle Kyler then scored on a wild pitch for the second run of the game. After a walk to leadoff hitter Taylor Spence, USD attempted a squeeze play, but SDSU first baseman Taylor Adams was able to toss the ball home to Sturdivant, who tagged a sliding Simms for the second out of the inning. Garcia then got Sara Silveyra to ground back to her in the circle for the final out of the frame.

In the third, San Diego State’s Parker led off with a single, and moved to third on a sacrifice bunt by Kiera Wright and groundout by West Hills alum Katie Byrd. Shelby Thompson grounded out to shortstop, keeping the Aztecs off the scoreboard.

San Diego added to its lead in the bottom of the third when Sophia Bjerk led off with a double and Lindsay Clare followed with a single. Casiano then blooped a single to right-center field to plate Bjerk with third run of the game. After a second walk to Kufta loaded the bases, Marissa Moreno replaced Garcia in the circle. Moreno (7-9) struck out Kane swinging and got Simms to ground out to Thompson, which allowed Savannah Shields to scoot home to extend the Torero lead to 4-0. After an intentional walk to Spence, Moreno struck out Shelbi Evans swinging to get out of the jam with minimal damage.

SDSU went to work in the fifth as Metcalfe led off with a walk and advanced to second on a Parker single. After a fielder’s choice by Kiera Wright which got Metcalfe out at third, Byrd ripped a single through the right side to plate Parker with San Diego State’s first run of the game. Thompson then doubled to left-center field to score Wright and Byrd, bringing the Aztecs to within a run a 4-3. Thompson would then score the tying run when Simms misplayed Sturdivant’s grounder at shortstop.

SDSU looked to take the lead in the sixth as Metcalfe reached on a one-out single and moved to second on an errant throw. Parker followed with single over the pitcher’s head and then stole second to put a pair of runners in scoring position. USD reliever Halley Kyler, however, struck out Wright swinging and got Byrd to ground back to her in the circle to keep the game tied at 4-4.

San Diego tried to take the lead in the bottom of the sixth when Evans doubled with two outs, stopping Moreno’s streak of retiring 10 straight batters. But Moreno got Silveyra to ground out to second to advance to the seventh.

The Toreros also threatened in the seventh as Casiano drew a two-out walk and stole second. Moreno, though, got Kelli Kufta to ground out to shortstop to move onto extra innings.

Munoz led off the seventh with a double for San Diego State and was replaced by Janina Jusay. After a strikeout, Metcalfe moved her over with a groundout. Parker, who was 3-for-3 prior to that at-bat, grounded out to Simms at shortstop to get USD out of the jam.

Neither team really threatened until the 10th where Kane completed the walk-off win for San Diego.

San Diego State dropped to 0-2 in extra-inning games on the season with both games going at least 10 innings (17 innings vs. UNLV on March 31 and 10 innings tonight).

The Aztecs have lost two straight against USD for the first time in program history.

SDSU has at least 10 hits in three consecutive games for first time since doing it three straight games from April 29-May 5, 2018.