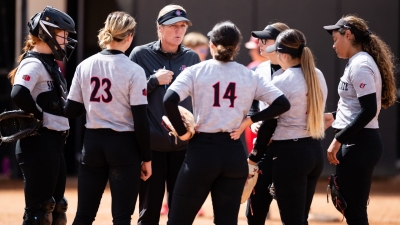 April 14, 2022 (San Diego) - San Diego State dropped the series opener to Boise State 6-2 Thursday night at SDSU Softball Stadium. The Aztecs (27-12) still remain in first place in Mountain West play with an 11-2 record, while the Broncos improved to 28-8 overall and 7-3 in league action.

SDSU left eight runners on base and BS left seven, but Boise State homered twice and had four doubles in the win.

The Broncos scored first in the top of the first inning when Kelsey Hall and Eliyah Flores led off the game with back-to-back doubles. San Diego State starting pitcher Maggie Balint got out of the inning by striking out Kelsey Lalor and Bella Rocco swinging, and getting Alycia Flores out for stepping on home plate while making contact with the ball.

The Aztecs answered in the bottom of the first as Jillian Celis reached on a two-out single, moved to second on a walk to Alexa Schultz and scored on a single up the middle by Danielle Romanello. Schultz was called out at third on the play, ending the inning tied at 1-1.

BS scored a pair of runs in the second with two outs as Eliyah Flores was hit by a pitch with two strikes and the bases loaded and Lalor followed with a single to score one. Balint got Rocco to fly out to right fielder Bella Espinoza to keep Boise State to just the two runs in the inning.

In the third, Mac Barbara drew a one-out, five-pitch walk and advanced to third when Celis reached on a fielding error by shortstop Eliyah Flores. Bronco starting pitcher Hannah Bailey, however, struck out Schultz swinging and fielded a grounder by Romanello to get out of the jam.

Taylor Adams halved BS’s lead in the fourth with a two-out, solo home run for SDSU. It was her fourth of the season.

Lalor responded in the fifth with a leadoff home run.

In the bottom of the fifth, Barbara walked and was replaced at second base following a Celis single. Schultz hit the ball hard, but it was right at third baseman Autumn Bennett, who touched third and threw to first baseman Alison Seng for the double play.

Boise State made it 5-2 in the sixth as Serena Huchingson and Bennett hit consecutive doubles. Dani Martinez replaced Dee Dee Hernandez in the circle and struck out Hall swinging on three pitches and got Eliyah Flores to ground out to third baseman Makena Brocki to keep the damage to a minimum.

San Diego State quickly loaded the bases with no outs in the sixth when Romanello and AJ Murphy each singled, and Brocki drew a walk. Romanello, however, was thrown out at home trying to score on a wild pitch. Following a walk to Adams, Bailey (10-2) struck out pinch hitter Jessica Cordola swinging before being relieved by Sara Johnson. Johnson then got Espinoza to ground out to keep it a 5-2 game.

Lalor homered for the second time of the game in the seventh for the final run of the game as Johnson retired the Aztecs in order in the bottom of the seventh to pick up her first save of the season.

SDSU finished 1-for-7 with runners in scoring position and 0-for-6 after the Romanello single in the first. San Diego State was also 0-for-2 with the bases loaded.

Celis and Romanello had two of the Aztecs’ six hits, while Barbara and Brocki each drew a pair of walks.

DP Mac Barbara extended her reached base streak to 33 consecutive games, which is the longest streak in the country this year (active streak and overall streak) and tied for the longest in recorded Aztec history (since 2006) with former All-American Hayley Miles set in 2012.

SDSU looks to even the series with Boise State at 6 p.m. on Friday.