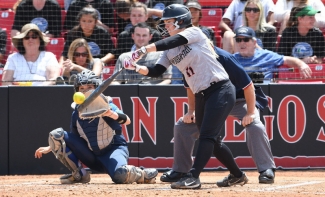 May 4, 2018 (Alberquerque) - San Diego State allowed four runs in the bottom of the sixth inning and left the bases loaded in the top of the seventh in a 5-2 loss to New Mexico Friday night at Lobo Softball Field in Albuquerque, N.M. The Aztecs dropped to 16-30 and 7-12 in Mountain West play with the loss, while the Lobos improved to 13-35 and 6-13.

San Diego State jumped out to 1-0 lead in the first inning when Kelsey Munoz singled in Shelby Thompson from third base. Thompson had reached on a one-out single and moved to third on a Katie Byrd single.

The Aztecs threatened again in the third as Thompson got things going with a leadoff walk and Byrd followed with a single. Munoz, however, flied out to center field and Thompson was called out at second for leaving before the catch, ultimately ending the SDSU scoring chance.

San Diego State almost scored in the fourth as Molly Sturdivant drew a one-out walk and Megan Smith followed with her second hit of the game. After Aris Metcalfe replaced Sturdivant a second, Zaria Meshack moved each runners up a base on a groundout. UNM pitcher Jensen Main was able to end the threat by getting Kiera Wright to ground back to her in the circle.

Cameryn O’Grady tied it up for New Mexico in the bottom of the fourth with a leadoff home run.

San Diego State took the lead back in the sixth as Taylor Adams reached on an infield single and moved to third on a sacrifice bunt by Sturdivant and a groundout by Smith. Meshack then chopped a single deep in the hole to the shortstop to plate Adams with the go-ahead run.

The Lobos answered in the bottom half of the sixth when Chelsey Johnson and D’Andra DeFlora each connected on two-run homers off Aztec reliever Alex Formby to take a 5-2 lead into the seventh inning.

SDSU made one last charge in the seventh, loading the bases on a Thompson walk, Byrd single and Taylor Stewart walk. With one out, UNM reliever Krissy Fortner was able to get Adams to line back to her in the circle and Sturdivant to fly out to shallow right field to end the game.

Byrd had three hits to pace the San Diego State offense, while Thompson doubled and had two walks. Munoz and Smith chipped in with two hits apiece.

Formby (10-12) took the loss after allowing three runs on three hits in an inning of relief, striking out one. Starting her sixth straight game, Marissa Moreno gave up two runs on five hits and two walks over five innings, striking out a season-high six batters.

SDSU dropped to 11-2 on the season when leading after six innings.

San Diego State fell to 11-7 on the season when outhitting its opponent.

Out of the Aztecs’ 30 losses this season, 21 have been by three or less runs.

SDSU and UNM play game two of the series at noon MT on Saturday.