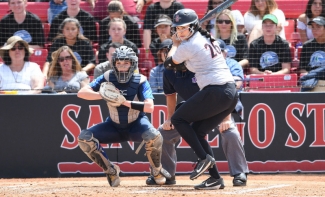 Photo:  Kelsey Munoz was 3-for-3 in the Aztecs' 4-1 loss at New Mexico.  Courtesy goaztecs.com

New Mexico jumped out to a 1-0 lead in the bottom of the first inning when Sydney Townes led off with a four-pitch walk, stole second and later scored on a two-out single by Chelsea Johnson.

D’Andra DeFlora made it 2-0 Lobos in the second with a home run to lead off the inning.

San Diego State loaded the bases in fourth on singles by Taylor Adams, Molly Sturdivant and Megan Smith. Zaria Meshack, however, lined out to left fielder Sam Oliver and Kiera Wright lined to a diving Cameryn O’Grady at shortstop to end the inning.

The Aztecs threatened again in the sixth when Sturdivant and Kelsey Munoz had back-to-back one-out singles. Smith lined out to Oliver in left field, but Sturdivant moved to third when Oliver’s throw sailed past pitcher Jensen Main. Main got out of the jam by getting Meshack to ground out to third.

UNM stretched its lead in the bottom of the sixth when Johnson connected on a two-run homer over the left-center field fence.

SDSU mounted one last-ditch effort in the seventh as it loaded the bases with no outs on a Wright single, Shelby Thompson walk and Katie Byrd single. Krissy Fortner, however, relieved Main and got Taylor Stewart to foul out to third base, Adams to fly out to left field, which scored Wright from third, and Sturdivant to line out to left field to end the game.

Munoz was a perfect 3-for-3 to lead San Diego State, while Sturdivant reached twice on a single and a walk.

San Diego State dropped to 12-8 on the season when outhitting its opponent.

SDSU dropped to 1-6 in the MW series finale this season.

The Aztecs play their final series of the season at home against Utah State beginning at 6 p.m. Thursday.  ECM Sports will have live coverage of the game, which you can find on Twitter at @ECMagSports.