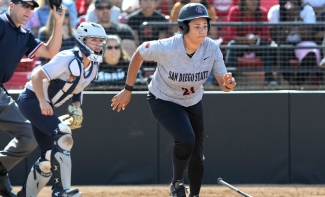 March 16, 2018 (San Jose) - Taylor Stewart hit a two-run homer in the top of the seventh inning, but it was too little, too late in a 5-2 loss by the San Diego State softball team at San José State Friday afternoon in San Jose, Calif. The Aztecs dropped to 9-18 on the season in the Mountain West opener for the top-two teams in the league last year, while the Spartans improved to 17-9.

SDSU was the victim of four unearned runs that SJSU scored in the bottom of the second. With two on and two outs, Rayohna Sagapolu reached on an error by the San Diego State second baseman, which allowed Brittany Abacherli to score from third base. Alyssa Avila then followed with a three-run home run.

San José State added a run in the fifth on a sacrifice fly by Cassidy Clark that scored Maricela Matos.

The Aztecs finally got going in the seventh when Stewart’s two-run, two-out homer over the center-field wall also scored Kiera Wright. Spartan pitcher Madison Aurin, however, got Shelby Thompson to ground out to seal the series opener.

Stewart had two of SDSU’s three hits in the game and drew a walk, while Molly Sturdivant had the team’s other hit.

Marissa Moreno was the tough luck loser, allowing five runs (one earned) on six hits and a walk over six innings, while striking out two.

The Aztecs continue their nine-game road trip and the weekend series with San José State at noon Saturday. The game is currently scheduled for Mission College in Santa Clara, Calif., but could move to San Jose CC in San Jose, Calif.

Moreno and Sturdivant; Aurin and Avila