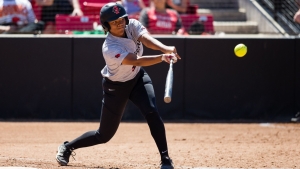 ECM Sports will have live coverage of the rubber match of the Spartans and Aztecs tomorrow at noon.  Follow @ECMagSports on Twitter for live coverage and updates.

Spartans even series with Aztecs

The Aztecs (18-22, 6-8 MW) jumped out to a 1-0 lead in the bottom of the second inning when Taylor Adams was hit by a pitch and scored on a double by Kelsey Munoz.

SDSU, however, did not record another hit off Spartan (27-13, 7-4 MW) pitcher Jenessa Ullegue again until the seventh.

In between, SJSU scored six runs, all with two outs.

San José State scored four times in the top of the fifth on a RBI single by Jacey Phipps, a wild pitch and a two-run homer by Madison Aurin.

Alyssa Graham connected on a two-run home run in the seventh to account for the Spartans’ other two runs.

San Diego State finally got to Ullegue in the bottom of the seventh when Taylor Adams led off with her fourth homer of the season. Alicia Garcia later added a pinch-hit double and Kristen Parker walked, but Ullegue got Kiera Wright to ground out to third to end the game.

Garcia started the game and allowed one run on five hits and a walk over four innings, striking out two.  Patrick Henry alum M.J. James relieved Garcia in the fifth and gave up five runs on six hits, three walks and a hit batter, while striking out one. James is now 3-7 on the season.

The Aztecs fell to 15-6 on the season when leading at any point in the game.

SDSU dropped to 13-5 on the season when scoring first.

Kiera Wright stole her 19th base of the season and now has the most stolen bases in a season in San Diego State history without being thrown out (19-for-19).

SDSU looks to capture the series with San José State in the rubber game at noon on Saturday.