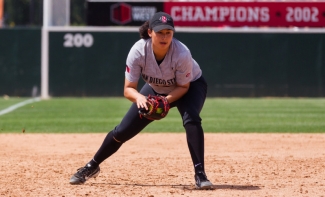 Aztecs outhit Rebels 11-7 in the loss

San Diego State tied a season high with 11 hits, but was 1-for-9 (.111) with runners in scoring position, leaving eight runners on base.

After SDSU left a pair of runners on base in the top of the first inning, UNLV went to work in the bottom half as Reina Bondi singled with one out and scored on a triple by Mia Trejo.

San Diego State started out hot again in the second with consecutive singles by Molly Sturdivant and Taylor Stewart, but then went in order with a popout, sacrifice bunt by Zaria Meshack and a groundout.

UNLV quickly got two runners on base in the bottom of the second with a double and walk, but it appeared the Aztecs were going to get out of the jam after a sacrifice bunt moved the runners and reliever Julie McDonald got Myranda Bueno to ground out to shortstop. Janine Pemecky, however, singled up the middle just past a diving Katie Byrd, a West Hills High alum, at second base to score both runners and make it 3-0 Rebels.

SDSU didn’t waste its opportunities in the third as Shelby Thompson led off with a ground-rule double to left-center field and scored on a Kelsey Munoz single. Aris Metcalfe replaced Munoz at first, then stole second, moved to third on a Taylor Adams groundout and scored on a Katie Byrd groundout.

San Diego State threatened again in the fifth as Thompson and Munoz each singled to lead off the inning. Adams, however, popped up a bunt and Byrd lined into a double play to Trejo at first base to end the threat.

The Aztecs made one last ditch effort in the seventh as Thompson drew a two-out walk and Munoz followed with a single, but Rebel reliever Charlie Masterson got Taylor Adams to fly out to right field to end the game.

Munoz had a career-high four hits to pace SDSU, while Thompson added two hits and a walk, and Sturdivant chipped in with two hits.

Marissa Moreno started the game in the circle and allowed two runs on three hits in an inning of work for the Aztecs, striking out one. McDonald pitched the middle three innings, surrendering one run on four hits and a walk. Fomby tossed a perfect two innings of relief with one strikeout.

SDSU’s 11 hits matched its most this season (also vs. Fairfield on March 14).

Kelsey Munoz’ four hits were the most by an Aztec this season (four different players had four hits in a game in 2017).