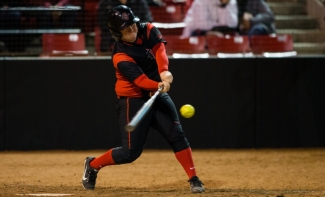 Aztecs even series with Rams

April 28, 2018 (San Diego) - Molly Sturdivant capped a five-run first inning with a grand slam and the San Diego State pitching staff allowed just two hits in a 6-2 victory over Colorado State Saturday night at SDSU Softball Stadium. The Aztecs (15-29, 6-11 MW) and the Rams (25-15, 9-8 MW) each have one win in the series ahead of Sunday’s rubber game.

CSU took a 1-0 lead in the top of the first when Haley Donaldson’s single scored Sarah Muzik. It would be Colorado State’s only hit until the sixth inning.

SDSU loaded the bases in the bottom of the first on a Kiera Wright walk, Shelby Thompson single and Kelsey Munoz walk. With two outs, Ram starting pitcher Alison Petty hit Taylor Adams on the first pitch of the plate appearance to score Wright with the tying run. Sturdivant followed with a blast over the center-field wall for her fifth home run of the season and second grand slam.

CSU got a run back in the third after loading the bases with no outs before San Diego State reliever Alex Formby walked Donaldson which scored Ashley Michelena. Formby (9-11) settled down by getting Corina Gamboa to ground into a fielder’s choice with the out coming at the plate, then struck out Amber Nelson looking and Danni Klein swinging to get out of the inning with just the one run allowed.

The Aztecs added an insurance run in the fifth when Taylor Stewart’s double to center field scored Aris Metcalfe from second base.

SDSU outhit Colorado State, 7-2, in a game that featured a combined nine walks and two hit batters. Kiera Wright led the way with two hits, a walk, a run and a stolen base, while Adams (single, hit by pitch), Munoz (single, walk) and Thompson (single, hit by pitch) each reached base safely twice in the game. Sturdivant had the one hit, but it was a grand slam.

The offense was plenty for the 1-2 punch of Marissa Moreno and Formby. Moreno, who pitched all seven innings in a 3-0 loss on Friday night, allowed two runs (one earned) on one hit and two walks over two innings tonight, striking out one. Formby pitched the final five innings, allowing one hit and four walks, while striking out five.

SDSU has won seven straight games and is 9-1 on the season when leading after five innings.

DP/C Molly Sturdivant has both of San Diego State’s grand slams this season (also Feb. 22 in a 7-0 win over Liberty).

The Aztecs play the Rams in the rubber game of the series at noon on Sunday.