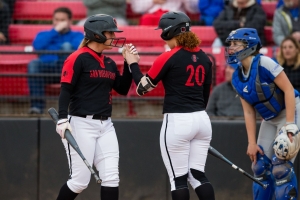 Thompson's two-run homer in the sixth propels Aztecs past Lobos

Down by three runs entering the bottom of the sixth, the Aztecs (13-14, 1-1 MW) scored four times on four hits to take the lead. Kiera Wright led off with a bunt single, then stole second base and scored on a Katie Byrd (West Hills HS) double. Maddi Ayers followed with a single, which put runners on the corners for SDSU. Molly Sturdivant flew out to deep right field, which allowed Byrd to trot home and Metcalfe, who came in for Ayers, to advance to second. One batter later, Thompson took a 1-1 pitch over the center-field wall to put San Diego State in the lead for good. It was her first of the season.

Marissa Moreno, who replaced reliever MJ James with one out in the sixth, retired the Lobos (8-17, 1-1 MW) in order in the seventh, getting pinch-hitter Maggie Buckholz to strike out looking to end the game.

UNM jumped out to a 2-0 lead in the top of the first on back-to-back RBI singles by Lauren Wilmert and Bailey Klitzke.

The Aztecs responded in the bottom of the first when Taylor Adams hit a three-run home run over the left-field fence. It was the first of the season for Adams.

SDSU added to its lead in the second when Kiera Wright scored from third as New Mexico second baseman Taylor Jones misplayed a ball thrown from catcher Sydney Broderick on a Kristen Parker stolen base. Sturdivant followed with a double to make it 5-2 San Diego State.

The Lobos tied it in the third on a two-run homer by Cameryn O’Grady and an infield single by Jones which scored Wilmert.

UNM regained its lead in the fourth on a two-run single by O’Grady.

After the Aztecs left two runners on base in the fifth, including both runners in scoring position with one out, New Mexico’s Andrea Howard doubled in D’Andra DeFlora in the top of the sixth to take a 8-5 lead, setting up SDSU’s heroics in the bottom of the inning.

Moreno (6-4) picked up the win in the circle for the Aztecs, allowing one walk and no hits over 1 2/3 innings of relief, while striking out two. Alicia Garcia started the game and scattered five runs on five hits and three walks, posting four strikeouts. James pitched the middle three innings and gave up three runs (two earned) on three hits and a walk with one strikeout.

The top six batters in the Aztec lineup all had at least one hit, going a combined 10-for-19 (.526) with two homers, two doubles and eight RBIs. If you count the pinch runners in the group, the top six positions in the lineup also scored all nine of the team’s runs.

The Aztecs and Lobos play the rubber game of the weekend series at noon on Sunday.