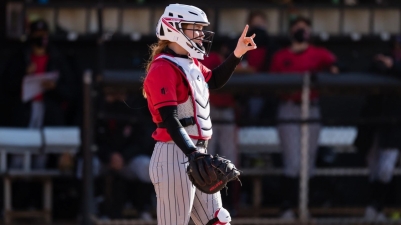 Aztecs trailed 8-0 after an inning

March 14, 2021 (San Diego) - San Diego State rallied from an 8-0 deficit for a walk-off 9-8 victory over Saint Mary’s in nine innings Sunday afternoon at SDSU Softball Stadium. The Aztecs (12-5) claimed the series with the victory.

After the two teams combined for just four runs and 11 hits over the doubleheader split Saturday, the bats came out in the series finale with a combined 17 runs and 22 hits.

It appeared the Gaels (8-12) would run-rule SDSU after scoring eight times in the top of the first inning on eight hits, a hit batter and a wild pitch. Included in the eight hits were five singles and three doubles, as SMC batted through the lineup and went to the plate 11 times in the inning.

San Diego State got on the scoreboard in the bottom of the second inning when a Nicole Siess triple to right-center field scored Riley Thies.

The Aztecs then came up big with six runs in the third thanks to four hits, two walks and a key two-out error. Taylor Adams (walk) and Shelby Thompson (single) got on base to start the inning, and Danielle Romanello followed with a double to left-center field to plate Adams. One batter later Jillian Celis reached base on a fielder’s choice to shortstop Jayda Alaan, who was unable to get Thompson diving back to third base. After Makena Brocki’s infield fly became SDSU’s second out of the inning, Thies appeared to ground out to second baseman Marissa Nishihara. Nishihara’s throw to first baseman Sasa Koria, however, sailed wide, and allowed both Thompson and Romanello to score. With a second life, San Diego State kept on hitting as Siess singled up the middle to plate Celis and Thies, and stole second. Jenna Holcomb followed with a walk and Adams singled to center field to plate Siess with the Aztecs’ sixth and final run of the inning.

SDSU tied it in the fifth when Thompson’s single up the middle scored Siess. San Diego State ended up loading the bases in the inning, but SMC pitcher Sofia Earle struck out Celis swinging on a 3-2 count.

Neither team had a real scoring chance again until the ninth when Holcomb singled up the middle with one out. With Adams at the plate, however, Holcomb was thrown out trying to steal second. Adams eventually walked and advanced all the way to third on a bloop single down the right-field line by Thompson. Romanello followed with a single through the right side to score Adams for the walk-off victory.

Maggie Balint picked up the win in the circle for the Aztecs after allowing just two hits and a walk in five innings of relief. She struck out four and is now 7-2 on the season. Hannah Johnson started the game for SDSU but gave up four runs on four hits in 1/3 innings. Karina Faasisila relieved Johnson in the first, and ended up yielding four runs on five hits and a walk over 2 2/3 innings, striking out one. Marissa Moreno pitched an inning of relief with two walks and a hit allowed, striking out one, before giving way to Balint to finish the game.

1B Taylor Adams drew three walks for the second straight game and had eight altogether in the three-game series with the Gaels. She entered the weekend with just three walks in her first 12 games. Adams became the first Aztec to record at least three walks in consecutive games since Patrice Jackson on March 21-22, 2014 at New Mexico (four on March 21 and three on March 22).

SDSU is now 5-1 in its last six extra-inning games.

STAT OF THE DAY II

Today’s game lasted 3 hours, 42 minutes, the exact duration of the doubleheader yesterday between the two teams (1:48 for first game, 1:54 for second game).

San Diego State kicks off Mountain West play with a series at Nevada, including two games on Saturday (noon and 2:30 p.m.) and one on Sunday (11 a.m.).