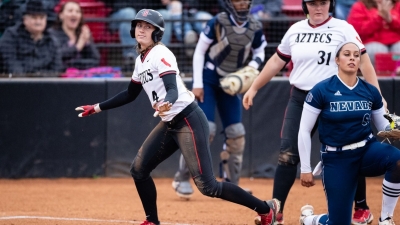 Balint tosses three-hit shutout with 10 strikeouts; Barbara drives in both runs in 2-0 win

April 8, 2022 (Las Vegas) - The San Diego State softball team used a three-hit shutout from pitching ace Maggie Balint and a pair of RBI singles by Mac Barbara to down UNLV, 2-0, in the Friday night series opener at Eller Media Stadium in Las Vegas.  The Aztecs (26-10) improved to 10-0 in MW play with their 12th consecutive victory, while the Rebels dropped to 27-8 and 5-2.

Balint (13-4) struck out 10 for her 10th double-digit strikeout game in her 18th start of the season. The right-hander allowed three hits, three walks and hit a batter, but stranded eight UNLV runners in the game. The Rebels were 0-for-12 against Balint with runners on base and 0-for-10 with runners in scoring position.

The Aztecs and Rebels play the second game of the series at 3 p.m. on Saturday.