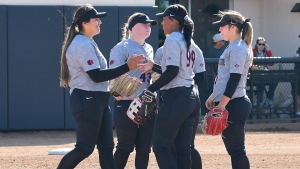 February 9, 2019 (Phoenix) - The San Diego State softball team split a pair of games Saturday at the Grand Canyon University Kickoff Tournament in Phoenix. The Aztecs (3-1) once again used a seventh inning rally to beat Charlotte 5-4 in the opener before falling to the host Lopes (2-2) 9-0 in five innings later in the day.

In the first game, SDSU scored the final four runs of the game, including three runs in the bottom of the seventh inning, to down the 49ers, 5-4.

West Hills alum Katie Byrd’s infield single scored Alicia Garcia in the sixth, but Charlotte got out of the inning by getting Kelsey Munoz to pop to third base with the bases loaded.

The 49ers loaded the bases themselves in the top of the seventh, but San Diego State pitcher Marissa Moreno got out of the jam by striking out Imani Rochelle looking.

In the bottom half, Molly Sturdivant led off with a double and was replaced by Gaby Olivarria. Taylor Adams promptly ripped a double to left-center field to make it a 4-3 game. Adams moved to third when Kristen Parker’s sacrifice bunt was misplayed by Charlotte and scored on a pinch-hit single by Maddi Ayers, tying the game at 4-4. Paige Barth moved Parker and Ayers up a base on a sacrifice bunt. It appeared the 49ers were going to get out of the inning when Alizae Umi grounded out to third, but Kiera Weight took a 3-2 pitch up the middle to plate Parker with the game-winning run.

The Aztecs took an early lead in the first when Wright scored on a Munoz single.

Rochelle put Charlotte on top in the fourth with a three-run homer and an RBI single by Meredith Harris in the fifth accounted for the other run by the 49ers, setting up SDSU’s dramatic comeback.

Wright led the San Diego State offense with three hits, three stolen bases, a run, RBI and a walk. Munoz and Alicia Garcia (2-for-2, R, BB) added two hits apiece for the Aztecs, who outhit Charlotte, 11-6, in the game. Katie Byrd also reached twice with a walk and a single.

Moreno (1-1) picked up the win in the circle for SDSU, allowing one run on four hits and three walks over three innings of relief, striking out three. Garcia started the game and scattered three runs on two hits and two walks with one strikeout.

In the second game of the day, San Diego State was unable to overcome a strong start by GCU, falling, 9-0, in five innings. Grand Canyon scored three times in the bottom of the first, once in the second and ended the game with a five-run fourth inning.

Parker, Sturdivant and Wright had the three Aztec hits.

Moreno took the loss after allowing four runs (three earned) on five hits and two walks over two innings. MJ James, meanwhile, gave up five runs on seven hits over two innings of relief, while striking out one.

The Aztecs saw their six-game winning streak come to an end in the second game against Grand Canyon, dating back to last year.

San Diego State wraps up its play in the GCU Kickoff Tournament on Sunday against No. 4/4 Oklahoma.