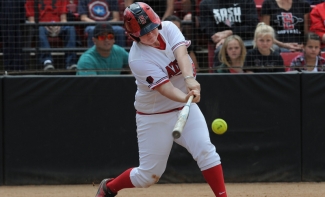 February 9, 2018 (Tempe) - The San Diego State softball team split a doubleheader at the Kajikawa Classic Friday night in Tempe, Ariz. The Aztecs (1-3) shut out Western Michigan 5-0 before falling to Northwestern 7-6 in eight innings in the nightcap.

In the nightcap, the Aztecs rallied from a 5-0 first-inning deficit to tie the game and force extra innings with Northwestern, but fell, 7-6, with the international tiebreaker rule in effect in the eighth inning.