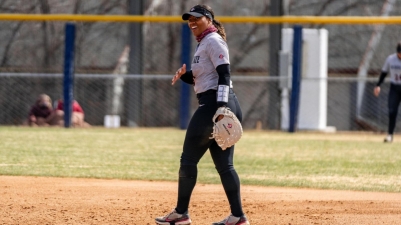 March 20, 2021 (Reno) - San Diego State split a doubleheader with Nevada Saturday afternoon at Christina M. Hixson Softball Park in the Mountain West opening series for both teams. The Aztecs (13-6, 1-1 MW) took the opener, 8-7, before falling, 5-2, in the nightcap on a walk-off three-run home run.

Taylor Adams started out a four-hit performance with a solo home run to lead off the game and Alexa Schultz later scored Shelby Thompson on a single to put San Diego State up, 2-0.

Nevada tied it in the bottom of the first on a two-run single by Haley Burda.

A two-run homer by Shelby Thompson in the fourth gave the Aztecs a 4-2 lead.

Sam Oliver’s RBI double in the bottom of the fourth brought the Wolf Pack to within a run at 4-3.

It appeared SDSU put the game away in the fifth after scoring four runs on just two hits. The big play came when Jillian Celis ripped a base-loaded double to score Sara Lillie, Makena Brocki and Nicole Siess. Celis later scored on an Adams single.

Nevada, however, got one run back in the fifth on a Lauren Gutierrez RBI single, and three runs in the sixth thanks to a two-run homer by Kallahan Hunter and an RBI single by Sadaria McAlister. San Diego State’s Karina Faasisila then replaced Maggie Balint with two runners on and just one out. Gutierrez quickly singled to load the bases, but Faasisila (2-2) struck out Kenzi Goins looking and got Sierra Mello to foul out to Schultz in left field to get the Aztecs out of the inning.

The Wolf Pack threatened once more in the seventh with a single and a walk. Faasisila once again got the visitors out of the jam by getting Chelie Senini to fly out to center fielder Jenna Holcomb, giving SDSU the 8-7 win.

Adams was 4-for-4 with a homer, two RBIs and two runs for San Diego State, which outhit Nevada, 11-9, in the game. Celis had three hits, including the bases-loaded double, and Thompson added two hits, two RBIs and two runs. Danielle Romanello singled and walked twice, and Siess drew three walks.

Balint (8-2) picked up the win after allowing seven runs (six earned) on seven hits and five walks over 5 1/3 innings, while striking out four. Faasisila gave up two hits and struck out two over 1 1/3 innings en route to her first career save.

In the nightcap, the Aztecs never trailed in the game but gave up a walk-off three-run homer with two outs in the seventh.

SDSU jumped out to a 2-0 lead in the top of the second as Lillie singled with one out and moved to third on a two-out double by Siess. Adams came through once again with a single to right field to score both runners.

Nevada halved San Diego State’s lead in the third as McAlister led off with a triple and scored on a Gutierrez single.

The game would stay 2-1 until the seventh when Faasisila quickly retired Senini and McAlister with a groundout and strikeout, respectively. Gutierrez, however, tied the game up with a home run over the center field fence. Following a walk to Hunter, Balint replaced Faasisila in the circle. Balint walked Ashley Salausa on a 3-2 pitch before Burda ended the game with a homer over the left-center field wall.

Adams led the Aztecs once again with two hits and two RBIs, while Schultz reached twice on a pair of walks.

Faasisila took the loss after allowing two runs on two hits and a walk in 2 2/3 innings of relief, striking out three. Marissa Moreno started the game and yielded one run on four hits and four walks over four innings, striking out four. Balint gave up a pair of runs on a walk and a hit without retiring a batter.

RF Nicole Siess drew a career-high three walks in the opener. It was the third straight game the Aztecs had a player walk three times in a game (also 1B Taylor Adams the final two games of the series with Saint Mary’s (March 13-14)). The three walks are tied for the fourth most in a game in program history.

1B Taylor Adams went a remarkable 6-for-7 (.857) in today’s doubleheader, including a home run, four RBIs and two runs.

The rubber game of the series between SDSU and Nevada is set for noon on Sunday.