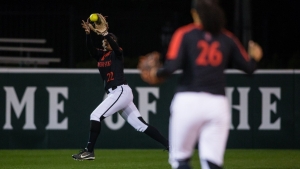 With a 1-0 lead after four innings, the Eagles (9-9) scored three times in the fifth inning and five in the sixth to complete the run-rule victory.

The Aztecs (10-9) struggled in all three phases of the game, managing only four hits and striking out 10 times against FGCU pitcher Riley Randolph, committing four errors and allowing 10 hits and nine runs.

Florida Gulf Coast got its first run in the third inning when Kate Kelly scored on a fielding error by SDSU.

After a perfect fourth inning by San Diego State starting pitcher MJ James, the Eagles scored three times in the fifth on three hits and two Aztec errors. Kelly scored once again for FGCU on a single up the middle by Haley Morrell. After a groundout, Reedy Davenport singled in Morrell to make it a 3-0 advantage for Florida Gulf Coast. The Eagles completed their three-run fifth as Davenport scored on a double-steal attempt where Ahnie Jumper was tagged out on the play.

SDSU had its best chance to score in the bottom of the fifth when Taylor Adams and Megan Smith had consecutive two-out singles. FGCU’s Randolph, however, struck out Kristen Parker swinging to keep San Diego State off the scoreboard.

Florida Gulf Coast then put the game away with five runs on six hits in the sixth off Aztec reliever Alicia Garcia, including a two-run double by Morrell, an RBI double by Raquel Fournet, and RBI singles by Diane Servideo and Davenport.

Maddi Ayers had a two-out single off Randolph in the sixth, but Molly Sturdivant grounded out to first base to end the game.

Shelby Thompson joined Adams, Ayers and Smith with base hits for SDSU.

James (2-2) took the loss for San Diego State, scattering four runs (two earned) on four hits and two hit batters over 4 2/3 innings. Garcia gave up five runs on six hits and a walk in one inning of relief, while Kelsey Munoz made her collegiate debut in the circle, retiring the only batter she faced in Marcella Parrado.

Randolph struck out 10 in the complete came shutout for the Eagles, allowing four hits and no walks.

San Diego State struck out a season-high 10 times in the game.

The Aztecs tied a season high with four errors.

2B Maddi singled in the sixth inning and now has reached base safely in seven consecutive games, tied with 3B Kelsey Munoz for the SDSU’s longest streak of the season.

The Aztecs travel to the Louisville Slugger Classic in Long Beach for five games from Thursday-Saturday, beginning 2 p.m. Thursday against Robert Morris.