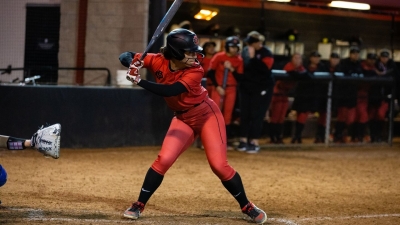 Aztecs improve to 8-3 on the season

March 5, 2021 (Riverside) - The San Diego State softball team swept a doubleheader at California Baptist Friday night at John C. Funk Stadium, winning the first game, 5-2, and posting a 2-0 shutout in the nightcap. The Aztecs are now 8-3 on the season.

In the opener, all seven runs in the game came via the long ball in a 5-2 SDSU victory, but none bigger than San Diego State’s Alexa Schultz.

Down, 2-1, with two outs in the top of the seventh inning, the Aztecs put together a late rally, quickly loading the bases on a Shelby Thompson hit by pitch, Taylor Adams reaching via a CBU (5-12) fielding error and a Danielle Romanello walk. Schultz then took a 2-2 pitch over the fence for the grand slam and to give SDSU the 5-2 lead. It was her fourth homer of the season.

The Aztecs had taken a 1-0 lead in the second when Sadie Langlet led off the inning with a home run.

The Lancers responded with a two-run homer by Tiana Patrick in the bottom of the second.

The game would remain 2-1 until Schultz’ timely grand slam in the seventh.

Langley (3-for-4) and Schultz (2-for-4) combined to go 5-for-8 with two home runs, five RBIs and two runs to pace SDSU, which outhit CBU, 8-3, for the game. Adams (single, walk) and Thompson (double, hit by pitch) also reached base safely twice in the game.

Johnson (2-1) picked up the win after tossing a complete game, scattering two runs on three hits and two walks, while striking out four. The right-hander retired the final six batters she faced after right fielder Nicole Siess threw out Mia Alvarez at the plate following a Brittany Galvez double to end the fifth.

Scoreless through four innings with a combined four hits between both teams, the Aztecs came up with a clutch hit in the top of the fifth. It appeared Goldsmith (0-1) was going to get out of the inning after she got Sara Lillie and Jenna Holcomb to fly out. Makena Brocki, however, reached on a single to Alvarez at shortstop to extend the inning. Jillian Celis followed with a double down the left-field line to plate Brocki with the first run of the game.

After stranding a runner in the bottom of the fourth, the Lancers threatened again in the fifth when Maile Olsen led off with a double and moved to third on a sacrifice bunt by Nicole Stark. With one out, Balint (4-2) got Alvarez to pop up to Brocki at third base and, following a walk to Galvez, struck out Ashley McBay swinging to get out of the jam.

SDSU added an insurance run in the sixth, once again with two outs. Siess first drew a walk and Romanello followed with a double to left field to make it 2-0, San Diego State.

Balint then retired CBU in order in the bottom of the sixth.

It appeared the Aztecs were going to add to their lead in the seventh when Holcomb and Brocki each had back-to-back infield singles, and stole third and second, respectively. With no outs and two runners in scoring position, Goldsmith struck out Celis looking, and got Thompson and Adams to ground out to shortstop to keep it a 2-0 game.

Balint once again retired the California Baptist order in the seventh to complete the shutout.

Balint finished the complete game shutout with just four hits and walk allowed, while striking out five. In five starts this season, the right-hander has four complete games and three shutouts.

On the other side, Goldsmith yielded the two runs on seven hits (six the final three innings) and three walks, striking out four.

Brocki led SDSU with a pair of hits, while Schultz also singled and walked.

Six of the seven runs SDSU scored in the doubleheader sweep tonight came with two outs.

LF Alexa Schultz hit a grand slam in the first game and now has four home runs this season in just 10 game played. She is homering once every 7.25 at-bats this year

SDSU looks for the series sweep when it hosts the CBU at 1 p.m. PT Saturday.

Balint and Romanello; Goldsmith and Mangrello