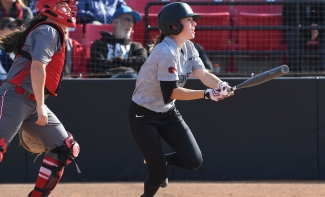 March 9, 2018 (Fullerton) - San Diego State lost a pair of games at the Louisville Slugger Invitational Friday afternoon on the campus of Cal State Fullerton in Fullerton, Calif. The Aztecs (8-14) first dropped a 7-0 decision to No. 16/19 Ohio State before falling in the nightcap to Boston Univ. 5-2.

In the opener, the Buckeyes (12-1) broke open a 3-0 game with four runs in the top of the seventh for the 7-0 win. OSU had 13 hits in the game, including two home runs and six doubles.

SDSU, meanwhile, had three hits, with two coming in a late rally with two outs in the bottom of the seventh. Taylor Stewart and Shelby Thompson each singled, and were replaced by Kayla Sok and Jordyn Fick, respectively. Ohio State pitcher Morgan Ray, however, got Alizae Umi to pop out to second base to end the game.

Marissa Moreno took the loss after allowing three runs on five hits and three walks over 3 2/3 innings, while striking out four. Julie McDonald also pitched for the Aztecs in the opener, surrendering four runs on eight hits over 3 1/3 innings, recording one strikeout.

Down, 5-0, after five innings, San Diego State got its first run in four games in the top of the sixth when Megan Smith led off with a double and later scored on a single by Molly Sturdivant.

Byrd led the SDSU offense with two hits, while Smith doubled and walked.

Moreno (2-7) had the loss after allowing three runs (two earned) on three hits over two innings of work. Alex Formby relieved Moreno in the third and yielded two runs (one earned) on five hits over four innings, striking out two.

SDSU had its modest two-game win streak against top-25 teams snapped in the 7-0 loss to No. 16/19 Ohio State. San Diego State is now 2-3 on the season against top-25 programs.

The Aztecs continue their play in the Louisville Slugger Invitational on Saturday morning, playing at 9 a.m. PTagainst Michigan State and 11:30 a.m. PT vs. No. 21/rv Long Beach State.