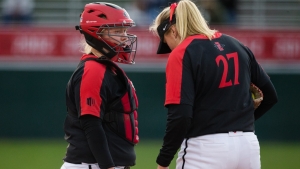 Aztecs shut out in back-to-back games vs. Boston University and Liberty

March 8, 2019 (Long Beach) - The San Diego State softball team dropped a pair of games at the Louisville Slugger Invitational Friday in Long Beach, Calif. The Aztecs (11-11) lost to Boston University 6-0 in the opener before falling to Liberty 8-0 in five innings.

In the first game of the day, SDSU left 11 runners on base and was done in by one bad inning, never being able to recover in a 6-0 loss to the Terriers (9-5).

After San Diego State left the bases loaded in each of the first two innings, BU scored five times in the top of the third on three hits, two walks and an Aztec error. Emily Morrow first scored on a fielding error by SDSU off the bat of Alexa Ponce. Maya Kipfmiller later cleared the bases with a double and pinch runner Emily Gant then scored on a Nicole Amodio single.

Boston didn’t score again until the sixth, when Jen Horita reached home on a wild pitch.

Each team only had four hits in the game, but combined for 15 walks and two hit batters. Unable to come up with the timely hit, San Diego State was 0-for-13 with runners on base, 0-for-7 with runners in scoring position and 0-for-3 with the bases loaded.

In the nightcap, the Aztecs ran up against a buzzsaw against the streaking Flames (14-6), falling by an 8-0 score in five innings. It was the 11 consecutive victory for LU and amazing ninth straight shutout.

Liberty got on the scoreboard in the top of the third inning with three runs on two hits, two walks, three stolen bases and an Aztec error. Autumn Bishop first singled in Kara Canetto and later scored on a single by Alexis Erich. The Flames’ final run of the inning came when Sarah Robertson scored on a fielder’s choice by Kaitlin McFarland.

LU tacked on five more runs in the fourth on three hits, five walks and an error. After Jaclyn Amader scored on a SDSU fielding miscue, Amber Bishop hit a two-run homer to give Liberty a 6-0 lead. McFarland and Amader later walked with the bases loaded to account for the other LU runs.

San Diego State had two hits in the game off Liberty pitcher Julia Dimartino with the singles going to Ayers and Wright.

SDSU second baseman Maddi Ayers had a hit in both games and now has a 10-game streak of reaching base safely and a six-game hitting streak, both the longest by an Aztec this season.

San Diego State was shut out twice in the same day for the first time since April 27, 2007 against New Mexico (lost both games by a 1-0 score).

The Aztecs wrap up their play in the Louisville Slugger Classic with two games on Saturday, including a 9 a.m. meeting with Ohio and then at 11:30 a.m. with Long Beach State.