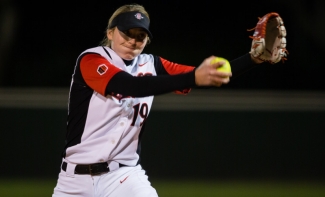 February 27, 2018 (San Diego) - San Diego State’s Alex Formby has been named the Mountain West Pitcher of the Week, the league announced Tuesday. It is the first weekly award by the Aztecs this season and the third of Formby’s career.

Formby led SDSU to a 3-2 record at the competitive Mary Nutter Collegiate Classic by going 2-1 with a 0.81 ERA over 17 1/3 innings, striking out 13 batters against just two walks. The Orange, Calif., native also limited her opponents to a microscopic .164 average, pitching and finishing four of the team’s five games.

Formby took the loss in extra innings with the tiebreaker rule in effect against Northwestern on Friday, allowing three runs (two earned) on four hits over 5 1/3 innings of relief, while striking out six. She then picked up the win in the nightcap against No. 25 Notre Dame, tossing 3 1/3 innings of scoreless relief, surrendering two hits and no walks, striking out one

Formby got the extra-inning win against Bethune-Cookman on Saturday after tossing 4 2/3 scoreless innings with just two hits and an intentional walk allowed. She struck out four. Formby got out of two late jams in the game, the first with two runners in scoring positon with one out in the sixth and then in the eighth with two runners in scoring position with no outs.

Formby ended her week against UC Davis on Sunday, giving up two hits and a walk over the final four innings of the game, striking out two.