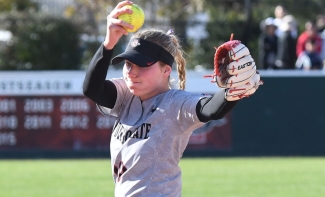 April 10, 2018 (San Diego) - San Diego State’s Alex Formby has been named the Mountain West Pitcher of the Week, the league announced Tuesday. It is the second weekly award by Formby this year and the fourth of her career.

Formby led the Aztecs to a series win at UNLV, pitching all three games and going 1-0 with a save and a 0.70 ERA in 10 innings. The senior right-hander allowed just three hits in the 10 innings, holding the Rebels to a .088 average, while striking out three against two walks.

In a 5-2, nine-inning SDSU win on Friday, Formby got the win after allowing just one run on one hit and two walks over six innings, striking out two. Formby picked up the save in a 4-1 win on Saturday with two hits allowed in two scoreless innings of work. Formby ended her weekend with two perfect innings of relief in a 3-2 loss on Sunday.