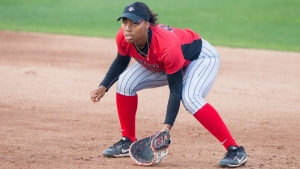 Down by a 5-0 score, the Aztecs (15-17, 3-4 MW) loaded the bases on a fielder’s choice, single by Katie Byrd (West Hills) and a Rebel (23-7, 4-2 MW) error with two outs. Sturdivant then took a 2-0 pitch over the left-center field fence to bring SDSU within one run. Shelby Thompson followed with a walk, but UNLV pitcher Jenny Bressler struck out Jessica Cordola to end the game.

Byrd, Thompson and Kristen Parker each had three hits apiece for San Diego State, which outhit the Rebels, 11-9, in the game.