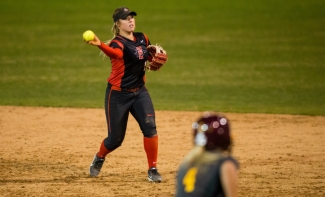 Aztecs drop to 54-5 all-time against the Toreros

USD jumped out to a 4-0 lead with a pinch-hit two-run homer by Emili Olague in the top of the third inning, and two more runs in the fifth on a RBI single by Halle Kyler and a RBI double by Taylor Spence.

SDSU finally got things going in the bottom of the fifth as Kiera Wright led off with a single, moved to second on a sacrifice bunt by Kayla Sok and to third on a bunt single by Zaria Meshack. Katie Byrd followed with a single to center field to score Wright from third and Molly Sturdivant then singled up the middle to score Meshack.

After San Diego State reliever Alex Formby retired San Diego in order in the sixth, the Aztecs threatened again in the bottom half getting two runners on with one out. Torero starting pitcher Hannah Boos, however, got Shelby Thompson to pop out in right-center field and Megan Smith to ground out to third to end the inning.

Byrd kept the game alive with a one-out double in the seventh and was replaced by Janina Jusay, but Delaney Heller, who came in for Boos in the beginning of the inning, struck out Sturdivant and Taylor Adams swinging to secure USD’s fifth-ever win in the series.

Marissa Moreno took the loss for the Aztecs allowing three runs on three hits over four innings, striking out one. Formby pitched the final three innings and gave up one run on three hits.

The Aztecs dropped to 8-3 on the season when they outhit their opponent.