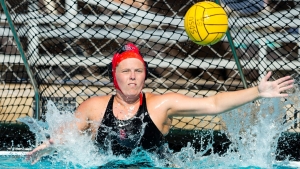 March 31, 2019 (Tempe) - The No. 21 Aztec water polo team won an overtime thriller 10-9 over San Jose State Sunday afternoon in their final game of the ASU Invitational. After neither team scored in either overtime periods or the first period of sudden death, Shelby Kraft scored the game-winning goal 23 seconds into the eighth period. The Aztecs have now won five of their last six games.

Emily Bennett scored four goals, Karli Canale had two goals and an assist and Hannah Carrillo had two goals. Maura Cantoni had an amazing game in goal and collected 17 saves, tying her season-high, also set against the Spartans.

The Aztecs scored the first three goals of the game and four of the first five. However, the Spartans responded to score four unanswered goals and took a 5-4 lead late in the second quarter. Karli Canale put away a penalty shot with 12 seconds left in the half to bring the score to a 5-5 tie.

Neither team would lead by more than two the rest of the way with the squads trading goals. Karli Canale again came up clutch with another goal via penalty with 1:46 left, which tied the game at 9-9 and forced overtime.

Neither team scored in the overtime periods and the game went to two periods of sudden death, before Kraft put away the game winner.

This was Emily Bennett’s sixth hat trick of the year.

The Aztecs and Spartans met earlier this year and the game went to overtime and had a final score of 10-9, although SJSU came out on top that time.

The Aztecs are on the road for two games next week. They play at Cal State Monterey Bay Wednesday at 5:00 p.m. and at Fresno State Friday at noon.