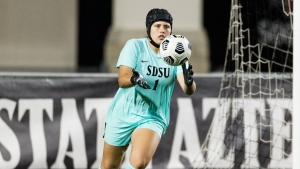 SDSU got their lone goal in the 29th minute and then held on for the shutout despite pressure from the Rebels in the second half. With the win, the Aztecs are currently in first place in the Mountain West West division with 12 points and a 4-1-0 record.

The Aztecs’ goal came from Anna Toohey who finished a cross from Emma Gaines-Ramos into the lower right corner of the goal.

SDSU held a 6-2 advantage in shots in the first 45 minutes but UNLV had seven to the Aztecs’ four in the second half causing a frantic final 10 minutes where the Rebels controlled possession.

SDSU finished with 10 shots and six different Aztecs had a shot.