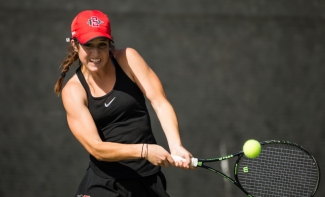 February 3, 2018 (San Diego) - The San Diego State women’s tennis team returned to the Aztec Tennis Center Saturday where the Aztecs defeated the UC Davis Aggies, 4-3. SDSU nabbed a win in the first of its current six-match home stand by claiming the doubles point and singles victories on courts one, three and six.

The Aztecs were dominant across the board in doubles play, logging wins in all three matches. Seniors Jana Buth and Paola Diaz owned court two with a 6-2 finish over Aggies Lani-Rae Gree and Kristina Breisacher, while junior Magda Aubets and freshman Nnena Nadozie cruised past Isabella von Ebb end Nikita Pradeep, 6-2, in the third seed to claim the doubles point for SDSU. Sophomore Mia Smith and junior Jenny Moinard also nabbed a victory on court one where they finished 6-4 over Kristy Jorgensen and Kelsie Bryant.

The Aztecs maintained momentum in the first couple singles contests as Diaz dominated on court three, taking down Green 6-1, 6-1, while doubles partner Buth notched a third point for the Aztecs with a 6-4, 6-2 win over Jorgensen.

A number of deuce games on courts five and six led to close scores in the final sets of each match, but Nadozie was unable to finish off Sara Tsukamoto, dropping 2-6, 6-2, 7-6 (2) in the five seed. Tied at 3-3 on the afternoon, Mulbarger maintained an edge to finish off her second set tiebreak strong against Isabella von Ebbe, 7-6 (3), 7-6 (1), giving SDSU the dual win.

The Aztecs, now sitting at 4-1, gear up for the next match in their six match home stand, continuing Monday against Point Loma Nazarene. First serve is set for 2:30 p.m. at the Aztec Tennis Center.