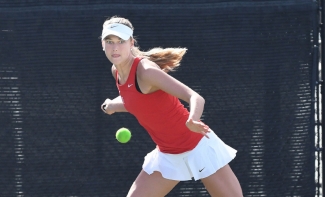 Aztecs take over singles to shut down Tritons

January 27, 2018 (San Diego) - The San Diego State women’s tennis team notched its second dual win of the season with a 5-2 victory over UC San Diego on Saturday, Jan. 27. The Aztecs dropped the doubles point to the Tritons, but bounced back to claim five of its six singles matches for the win.

Seniors Jana Buth and Paola Diaz were the first to finish in doubles play, finishing 6-3 to top UCSD’s Ashley Chao and Becky Chou, but the doubles contests remained tight on courts two and three and the Aztecs eventually dropped the doubles point. Freshman Nnena Nadozie and junior Magda Aubets were unable to get past Shuchen Lin and Chloe Wight, falling 6-3, while junior Jenny Moinard and sophomore Mia Smith were unable to overcome Alexandra Weil and Madison Hale, dropping a 6-4 decision.

The Aztecs turned the tables in singles play, clenching the dual victory with wins in their first four matches. Freshman Abbie Mulbarger dominated UCSD’s Hale on court six with a solid 6-0, 6-1 win, while Magda Aubets downed Chou with ease, 6-2, 6-0, in the two seed.

Following Buth’s 6-0 start in the first set, she and Chao sparred in the No. 1 seed until Buth ultimately won with a 7-6 (4) finish in the second set. Moinard had the deciding match on court four with a breezy 6-2, 6-2 triumph over Jasmine Hosseini.

Diaz faced a tough matchup against UCSD’s Weil and was ultimately unable to put together a win, falling 6-4, 6-3, but Nadozie wrapped up the afternoon of play after splitting the first two sets with Valeria Corral and winning the 10-point tie-break, 6-2, 3-6, 10-8.

The Aztecs, now 2-0, return to the Aztec Tennis Center tomorrow at noon to take on UC Irvine. The Anteaters sit at 0-1 after opening their season with a 4-3 loss to Grand Canyon at home this morning. Final results will be available following tomorrow’s match on www.GoAztecs.com.