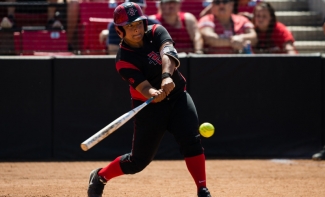 May 16, 2017 (San Diego) - San Diego State softball’s Jenavee Peres (Garden Grove, Calif.) has been named the Mountain West Player of the Week, the league announced Tuesday. It is the second weekly award of the season for Peres and fourth of her career.

Peres opened her weekend with a 3-for-5 outing with a RBI, run and double in a 11-9 win on Thursday. In a 5-4 loss on Friday, she led off the game with a home run and was 3-for-5 overall. Peres finished off her weekend in a 13-6 win on Saturday by going 2-for-4 with a homer, five RBIs, three runs, a double and a walk.