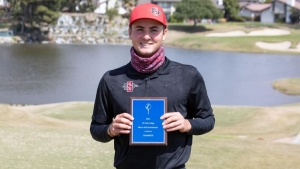 Aztec freshman wins playoff with a birdie on third hole

Koeneke led Utah State’s Colten Cordingley and UC Irvine’s Darien Zhao by one stroke heading into today’s final round at 1-under 143 but was forced into a playoff with Cordingley following a 3-over 75 to Cordingley’s 2-over 74 as each golfer posted a 54-hole score of 2-over 218. After Koeneke and Cordingley each recorded pars on the first two playoff holes, Koeneke sank a birdie putt to break the tie and capture his first individual title, and the fourth by an Aztec over the last two seasons (each by a different player).

After taking fourth at the competitive National Invitational Tournament over the weekend, SDSU only had four individuals compete in the UCSD Invite in nearby Carlsbad and didn’t officially enter as a team. San Diego State, however, would have won the event by two strokes at +27 over actual champion Utah State (+29), despite playing only four of the usual five golfers in a starting lineup.

Just two strokes behind Koeneke and Cordingley was Aztec Amadeo Figus, who tied for third with UC Santa Barbara’s Brandon Bueno and Southern Utah’s Jake Vincent at 4-over 220. Figus was remarkable consistent with a 74 and 73 yesterday, and another 1-over 73 in today’s final round.

The Aztecs will next compete April 5-6 in Wyoming’s Cowboy Classic at Whirlwind Golf Course in Chandler, Ariz.

^ competing as an individual