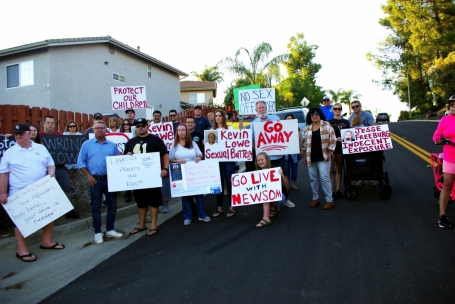 September 21, 2022 (Lakeside) -- At 5:45 pm on September 17th, 50 neighbors gathered for a third protest against the placement of five sex offenders in a house in their close-knit family neighborhood.  Their first protest was September 11th... Mayor Wells of El Cajon attended and offered support, though has no jurisdiction over unincorporated El Cajon, but responded to residents’ invitation to come out.

When asked if he would talk to the supervisors or anyone else, he replied, "I would be happy to meet with them. This an East County problem.” Wells says of the predators, “Why are they placed here and the County is doing nothing to stop it? There are kids all over the place here. East County is where people are sent when people don't want them in their neighborhood."