June 17, 2012 (Lemon Grove)—It was a sweet victory for Lemon Grove Firefighters Saturday night, when driver Joe Lavigne climbed out of his smashed-up vehicle to claim his department’s trophy.  Lemon Grove entered two cars in the Firefighters’ Demolition Derby at the San Diego County Fair in Del Mar—and both made it into the final round.

View our video of the final round by clicking above. 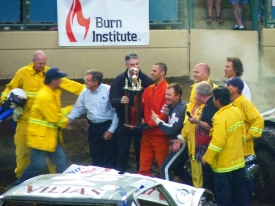 The event, sponsored by Viejas and Farmer’s Insurance, is an annual favorite among fans and firefighters, benefitting the San Diego Burn Institute.

It takes a real man to drive a car painted pink (sponsored by Mary Kay Cosmetics), one of Lemon Grove’s two entries. Chris Wrisley did the honors.

But it was a second sedan, painted black and driven by Lavigne, that proved to be the last car running in the smash-and-bash competition.  This is Lavigne's second victory in three years and he continues to be among the top drivers in attracting sponsorships, raising money for the Burn Institute. Both worked long hours on their cars, with help from Lemon Grove Firefighters.

Viejas Fire also fielded two entries—and both made it into the final round.  One sported shark’s teeth, another a a ‘60s-style colorful paint job. 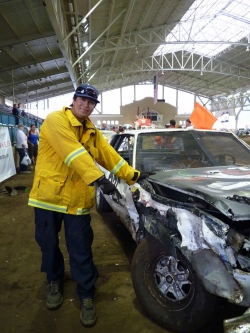 Federal firefighters made a valiant effort in the final round, as did several other entrants from fire departments around the county.

Each vehicle competed in a preliminary round.  There was no shortage of action, with wheels flying off, steam pouring out and flames leaping from one vehicle (not a problem in an arena full of firefighters!)

Between rounds, teams had 10 minutes to get vehicles patched up. This ranged from tire changes to pounding out body damage sledgehammers.  One driver, unable to see past a buckled hood, hopped on top to flatten it by jumping up and down.

Lavigne received a perpetual trophy for Lemon Grove’s fire station to display until next year’s competition. But the real winners are burn victims, who will benefit from funds raised by firefighters at the event. 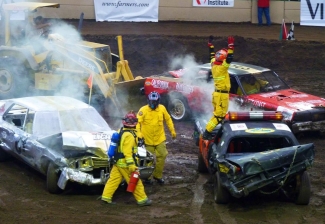 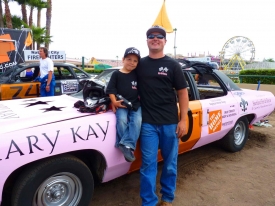