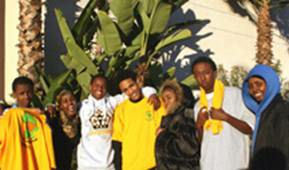 To celebrate the triumphs and achievements the Somali people have experienced in San Diego, SFS will be hosting its second Annual OceanLeaf Awards Celebration on October 17 to honor community members who have been influential in helping to advance the community. Six honorees will be recognized for their efforts in categories to include leadership, spirit, innovation, and health and wellness.

You can submit your nomination at http://www.somalifamilyservice.org/. For further information about the nomination process and the event, please contact Hana Mandikova via phone, 619.265.5821, or email, hmandikova@sfssd.org.
Somali Foundation Service of San Diego is a nonprofit organization designed to equip the more than 35,000 Somali and East African refugees in San Diego with the necessary educational and economic skills to become responsible, independent and contributing members of society. Since its inception in 2000, the organization has provided culturally and linguistically appropriate programs and services to thousands of members of the San Diego Somali and other East African communities, easing their transition and ensuring successful functioning in their new home.