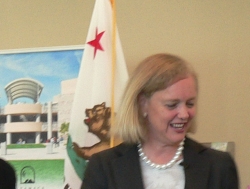 September 10, 2010 (San Diego’s East County) – Mark Yudof, president of the University of California and Jack Scott, chancellor of the California community college system have resigned from the California Chamber of Commerce board of directors in protest of the organization endorsing Republican Meg Whitman for Governor. The leaders sharply criticized the Chamber for taking a partisan stance, the Los Angeles Times reports.

“I do not believe the board is using sound judgment,” wrote Scott. “It is destructive to the Chamber’s core mission and the businesses it represents when it becomes a partisan operation.” During an August 27 visit to Cuyamaca College in El Cajon, Scott called state budget cuts in education “a tragedy” for students.

Yudof said that as president of a public university, “I cannot take sides in electoral politics.”

Locally and statewide, many leading educators have expressed alarm over the impact of state budget cuts on public education. But Whitman, a visit to Cuyamaca College, called for further cuts in state spending, despite unprecedented deep cuts already made in education and other programs. “We do not have a revenue problem. We have a spending problem,” she said. In a press conference after her speech, she said up to $35 billion in spending could be cut from the budget and added that she believes another 30,000 to 40,000 state worker jobs could be eliminated.

She claims to have a “passion for education” and noted that “our higher education , the envy of most of the country, is in serious jeopardy. If we let what happened to K-12 schools happen to higher education, there is no turning back.”

But when asked by East County Magazine how she would address repeated steep tuition hikes that have priced many California State University and University of California students out of a higher education, Whitman declined to support a roll-back in tuition fees.

“We’re going to have to mitigate on a go-forward basis,” she said. Whitman offered no reassurance for a Cuyamaca College employee who expressed concern over lay-offs of state employees at community colleges. Locally, the college district has had a 17% spike in recent enrollment due to economic pressures forcing students to seek lower cost education alternatives.

“The cost is pricing very many would-be students out of the chances of getting a college education,” said Pat Washington, an instructor at San Diego State University. Besides raising fees, SDSU also eliminated guaranteed local student admissions, a move that has resulted in overcrowding at community colleges from students who have met all academic requirements for the CSU system, yet been denied admission. Meanwhile, SDSU has admitted more non-local students, raising revenues through dorm fees. SDSU president Stephen L. Weber said state budget cuts led to the changes.

The California Teachers Association has endorsed former Governor and current Attorney General Jerry Brown for Governor. “Jerry Brown knows that California’s future depends on a world class, quality public school system,” an endorsement message on the CTA webpage states. CTA noted that when Brown was Governor, “state funding for higher education, including community colleges, more than doubled during his two terms. Brown believes that the best education reform takes place when there is collaboration among educators, parents and administrators to best meet the needs of students in neighborhood public schools. He understands that schools must have the resources they need to succeed …”

During Brown’s reign, test scores in California schools ranked among the highest in the nation. Today, they have fallen to nearly the lowest among all 50 states.

Those earlier cuts appear to be having a measurable impact. On July 29, a Union-Tribune headline read, “Underperforming schools increasing in East County.” Many failed tdo meet graduation rates or federal test standards.

In its endorsement, the Chamber made no mention of Whitman’s stances on education but focused instead on business issues. “For the business community as well as the electorate, job creation and economic recovery are the most important issues,” said Allan Zaremberg, CEO of the California Chamber. “CalChamber supports Meg Whitman’s priority of removing barriers to private sector job creation and creating certainty for those who wish to invest in our state.”

The California Chamber has traditionally refrained from making endorsements, though did endorse Arnold Schwarzenegger in the recall election against then-Governor Gray Davis. Nationally, however, the Chamber has become increasingly political. From 1998 to 2009, the Chamber’s expenditures for lobbying increased ten-fold, from $17 million to $144 million, according to the watchdog site www.U.S.Chamberwatch.net.

Earlier this year, the California Chamber drew criticism for airing an ad titled “Enough is Enough” criticizing Jerry Brown—ads that MediaMatters.org, a nonpartisan watchdog group, found were misleading and inaccurate.

The budget battle in Sacramento has become a partisan divide, with 100% of Republicans voting against any budget that would increase revenues, while Democrats refused to vote for deeper education cuts, instead offering up various budget proposals that would raise revenues through means such as a wellhead tax on oil or a nickel-a-drink tax increase on alcoholic beverages. Governor Schwarzenegger vetoed one Democratic-backed budget last year and Democrats could not muster the two-thirds majority needed to override the veto. Meanwhile, cuts to education continue.

“The endorsement of one or more specific candidates puts the Chamber on a slippery slope,” said Doug Deane, who co-chairs the San Diego East County Chamber’s Business Education Committee, making clear that he was speaking as an individual, not representing the Chamber or the Committee. “If they register an endorsement for Whitman, and Brown wins in November, that will affect the Cal Chamber’s ability to work proactively with the new governor. They are rolling the dice and betting everything on a Whitman win, which I think is inappropriate and short-sighted.”

Deane said he also disagreed with the education leaders’ resignations and said they should work within the Cal Chamber to convince them to work in a bipartisan fashion. “The parties in volved here should be talking more with each other and with Sacramento. They can’t do this by pulling up their tent stakes and riding away. The two education leaders could easily have made their own positions clear by sending out press releases announcing their disagreement,” he said, “rather than resigning their positions on the board.”

While Chambers have traditionally taken conservative stances on business issues, not all have engaged in political endorsements. Leaders of the La Mesa Chamber of Commerce and Rancho San Diego-Jamul Chamber, for example, have confirmed that their organizations do not make endorsements on candidates.