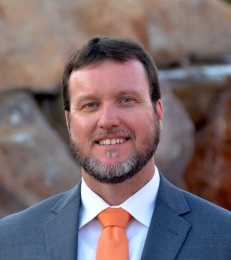 April 2, 2022 (Santee) - During a recent townhall meeting, Stephen Houlahan, candidate for CA’s 48th Congressional District, discussed the ways Gillespie Field airport negatively impacts adjacent Santee and El Cajon residents. He cited crashes and noise and air pollution, and said, given all the development that has taken place in these East San Diego County cities over the years, the region may not be the right place for an airport anymore.

Houlahan has long voiced apprehensions about planes crashing into the airport’s nearby neighborhoods, and unfortunately, recent events prove his fears have merit.

On December 27, 2021, a Learjet 35A crashed and exploded in the unincorporated Bostonia neighborhood near El Cajon, killings its four members, damaging a resident’s yard, and causing power outages for more than 3,600 SDG&E customers throughout the El Cajon area. A preliminary report issued in January by the National Transportation Safety Board (NTSB) revealed “the airplane struck a set of power lines and impacted the yard of a residential home” while attempting its descent into Runway 27R of Gillespie Field.

Two months earlier, on October 11, 2021, a Cessna C340 crashed onto a residential street in Santee. The plane hit a man driving a UPS truck, who died, as did the pilot. Two residents were sent to the hospital, two houses were destroyed, multiple cars caught fire, and the plane crashed dangerously close to Santana High School. The pilot had been intending to land at Montgomery-Gibbs Executive Airport in Kearny Mesa, but given the low altitude at which he was flying, it is conjectured that mechanical failure may have forced him to attempt an emergency landing at Gillespie Field. The NTSB final report has not yet been issued.

A 142,000-square-foot Amazon distribution center was set to be constructed on land that presently serves as a safety zone for pilots experiencing take-off difficulties.

Said Houlahan, “The high probability of plane accidents in the region is the very reason I was against building an Amazon distribution center on the airport’s safety zone. I thought there was a good possibility that Amazon’s future employees were going to pay with their lives.”

Many nearby residents were also against the Amazon project, citing increased noise, pollution, and air and ground traffic, and hence, reduced property values, amongst their concerns. A group called Neighbors Against Noise and Traffic was formed, and it filed a lawsuit in the San Diego Superior Court to halt construction of the facility.

In October 2021, Amazon pulled out of the project. Whether its decision was due to resident outcries or whether it was due to the Working Families Ordinance, a county proposal that calls for workers to be paid union-level wages and receive 56 hours of paid sick leave per year, is unknown. Amazon did not state the specific reasons for its decision not to build a distribution center in El Cajon.

Gillespie Field airport was developed back in the 1940s as a Marine parachute-training base. The site was chosen because surrounding mountains ensured low wind levels that helped keep paratroopers safe.

“Today the area is heavily developed, so those low winds that kept paratroopers safe are doing the exact opposite for the people who live within the El Cajon Valley. There is an inversion layer that keeps pollutants from heavy industry, cars, and the airport trapped within the region,” said Houlahan.

Lead emission from Gillespie’s small piston-engine airplanes is the most nefarious threat to residents’ health. Numerous research studies have shown that children who live near small airports in which the aircraft use leaded fuel (as opposed to kerosene-based fuel used by jet aircraft at large airports) have particularly high levels of lead in their blood, and no level of lead is safe for children. Lead exposure has been definitively linked to neurological and development problems in children.

Due to a study that found elevated levels of lead in children living near Reid-Hillview Airport, in August of 2021, the Santa Clara County Board of Supervisors unanimously voted to stop leaded fuel sales in both the Reid-Hillview and San Martin airports. Nothing, however, prevents pilots from filling up elsewhere and then flying into those airports, and some aircraft are not equipped to use unleaded gas.

“I am absolutely always one to err on the side of caution for the health of children. Remember, it was lead piping that caused the fall of the Roman Empire,” said Houlahan. “Lead is not good. It’s toxic.”

“The other thing people don’t understand,” continued Houlahan, “is that Gillespie Field is a giant superfund site waiting to happen. A business called Ametek-Straza used to operate east of the airport, and that business caused a toxic plume of chemicals that were dumped in the soil and traveled underneath an elementary school, underneath Highway 67, underneath Gillespie Field, and are about to penetrate into Santee. The site needs to be cleaned up.”

Despite resident environmental and safety concerns, Gillespie Field has for several years been seeking to expand operations onto its 70 unused acres, a plot of land that was previously occupied by the Cajon Speedway. It seemed the expansion was a go, but in 2016 the FAA was unable to fund the project.

A group called Citizens Against Gillespie Expansion (CAGE), founded by Robert Germann, worked to thwart the airport’s efforts to expand, and this organization remains on guard against any future efforts. At one time, CAGE was pushing for the acreage to become the site of a new Chargers Stadium. Today, its members advocate for other uses, such as another type of sports venue, a concert arena, or a farmer’s market.

Stephen Houlahan says the East County communities need to carefully consider whether Gillespie Field is benefiting them, and citizen concerns need to be addressed by the San Diego County Board of Supervisors. He said, “Many of these small airports are relics from an earlier time period, before areas became developed. It’s likely citizens want the land to be repurposed so that it provides more value to the community.”

Was this at a Santee Town Hall or some other Town Hall? I am trying to fathom why we should pay much attention to a candidate for Congress in an Orange County District. Is this guy shilling for CAGE.