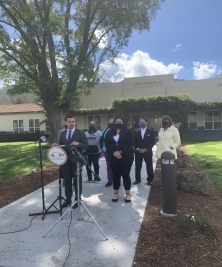 March 16, 2021 (Escondido) – In a win for foster youths, San Diego County Supervisors today voted unanimously to approve a motion asking state officials to grant a reprieve to the San Pasqual Academy, a boarding school for foster youths slated to close later this year.

The school has been a safe haven for foster youths, who found a home at the academy when they were unable to be placed with families as they aged out of the system.

Rev. Shane Harris, president of the People's Association of Justice Advocates, has led efforts to keep the school open. After today's vote, he stated, “I thank the Board of Supervisors for their unanimous support of this motion. Today we have taken a step toward reimagining what foster care can look like in San Diego County and beyond, starting with the nation's first residential educational campus for foster youth, San Pasqual Academy. The fight for a carve out to keep San Pasqual in existence in our nation begins now. Let's reimagine foster care together."

Harris is an alumni of San Pasqual Academy, which he credits with helping him develop leadership skills after years in foster care.

At today’s hearing, Supervisor Jim Desmond made a motion request an extension from California state officials to keep the San Pasqual Academy open through at least June 2022.  The motion also asks the county to work with foster youths and stakeholders to do an analysis on options to keep the academy open beyond 2022, with a potential carve-out in state and federal legislation.

As ECM previously reported, the facility was opened in 2015 as a pilot program approved by the state for foster youths up to age 21. But the academy was slated to close in December.

Harris, a national civil rights activist, rallied public support urging Supervisors and the Governor to take action to protect the approximately 70 students still at the academy.

The first was held last Tuesday, Mar. 9 at the campus and featured a variety of speakers including current students.

“I dropped out of high school… I was looking at a life of minimum wage jobs…but then I entered the system, didn’t go to a foster home, came straight to San Pasqual Academy… I came to SPA not knowing the area, not knowing the people, or the amount of support I would be getting,” said Eman Mansour-Ponce, a  professionally dressed and articulate young woman – the only current student who spoke to press.

“I have been accepted to three Cal State Universities and am planning to attend one, I don’t know where I would’ve been at…but all I know is I have San Pasqual Academy’s support,” added Mansour-Ponce.

The conference was precipitated by a tour of the campus. Supervisor Desmond was the sole supervisor to attend this event.

An online petition, initiated by Harris’ office, gathered votes of 475 community members, a move that Harris feels was critical in keeping the school open.

“The safety and well-being of children in the foster care system is our top priority. We continue to work with our local partners who serve foster children and the state to determine the next steps for our youth at San Pasqual Academy,” a spokesperson for the County Health  and  Human Services Agency told ECM.

Harris hopes that this incident will be a catalyst for revamping the foster care system and wants to see San Pasqual Academy stay open past 2022.