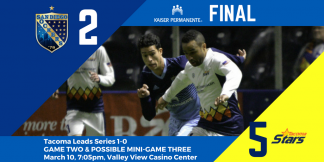 Taylor Walter Bond scored the unassisted game-winning goal at 3:43 of the fourth period to put Tacoma up for good. Jamael Cox added another tally two minutes later give Tacoma a two-goal margin. San Diego used the sixth-attacker for the final four minutes but was unable to get past the Stars defense, and allowed a Raphael Cox empty-net goal to put the final nail in the Sockers coffin.

Tacoma had most of the play in the first period, and their hard work paid off with goals from Philip Lund and former Socker Nick Perera for a 2-0 advantage to end the quarter.
Tacoma had a chance extend their lead when San Diego took a bench penalty for too many men, but the top-rated penalty-killing unit turned the disadvantage into San Diego's first goal. Hiram Ruiz found Felipe Gonzalez for a breakaway goal to cut the Stars lead in half. Less than three minutes later, Captain Kraig Chiles took an errant pass and chipped Tacoma goalkeeper Danny Waltman from just outside the box to tie the game at 2-2.
The third period was played evenly with both teams having some quality chances on goal, but the contest remained deadlocked going into the final quarter.
MASL leading goalkeeper Boris Pardo made the start for San Diego and suffered his first loss in regulation.  Chris Toth is expected to be in goal for Game Two in San Diego. Tacoma's Danny Waltman made seven saves on the nine shots he faced for the victory.
Game two and a possible deciding mini-game of the Divisional Championship Series is on Saturday, March 10 at 7:05 p.m.