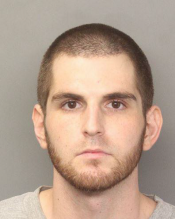 Update: Torillo was captured Tuesday night at an El Cajon motel.  He will face charges of escaping custody in addition to drug-related charges.

September 9, 2014 (San Diego’s East County) – The Sheriff has issued a warning to residents to be on the lookout for Don Andrea Torrillo, a prisoner who escaped custody from Central Jail just before 6 p.m. on Tuesday. He was last seen wearing a dark sleeveless shirt with a star in the middle, khaki shorts and slippers. He has a tattoo on his left bicep shoulder area. He has short brown hair and eyes.