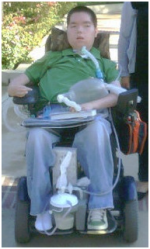 January 25, 2012 (San Diego) – Raul Carranza has Muscular Dystrophy. He cannot walk, move his arms, eat or even breathe on his own. He requires round-the-clock nursing care—care denied after Medi-Cal slashed his nursing hours due to state budget cuts.

“Last year I moved away to UCLA by myself and lived away from my family for a whole semester,” he said. “Unfortunately I had to come back home to San Diego at the end of December." That's because the state cut his nursing hours, leaving him unable to survive on his own.