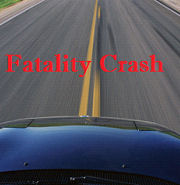 March 20, 2012 (San Diego) – A driver who lost control on I-8 westbound at College Avenue struck a guardrail and died shortly before 10 a.m. yesterday.  The Medical Examiner’s office has identified the victim as Bernardo Carrillo, 33, a resident of Mexico who was visiting friends in San Diego.

Two passengers were in the vehicle when the accident occurred.  Multiple parties called 911, but death of the driver was pronounced at the scene.  California Highway Patrol is investigating the accident.